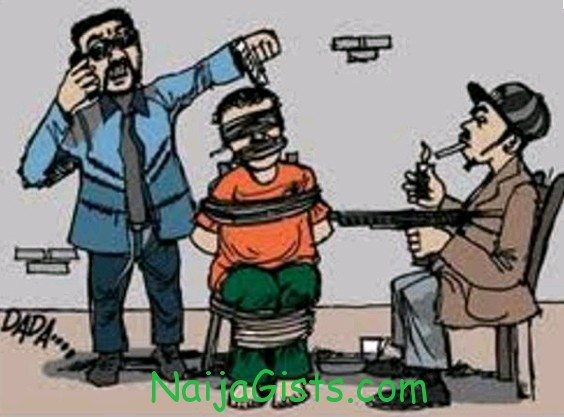 Sept 22, 2012 – Man Kidnaps Self To Extort Money From Wealthy Father

This not-so-funny incident happened in Delta State when a man identified as Daniel Akagbo allegedly planned his own kidnap in a bid to extort money from his wealthy father. naijagists.com

On the 10th of September 2012, Daniel liased with a gang of kidnappers to fake his abduction at Effurun area very close to Warri.

He was later whisked to a shrine at Obiaruku Ukwani area of the state by the kidnappers, from where they put a call through to his troubled father.

They broke the news of his kidnap and demands for N50 million which was later reduced to N20 million after negotiations.

The arranged plot was foiled when policemen storm their hideout and arrested one Governor Ejiro who was accused of having a hand in the plot.

It was Ejiro who led the policemen to the hideout where Daniel Akagbo and eight of his accomplices were arrested.

According to the Delta Police Public Relations officer, Mr. Charles Muka, the police are on the trail of the at-large accomplices in the plot.

Daniel Akagbo, 17, has been arrested by Delta State Police Command.