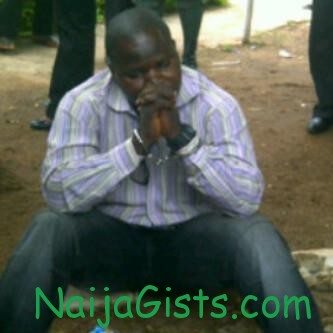 Abiodun Otaoruju, a 34 year old man has been arrested for killing his one-month-old baby in Lagos State Nigeria. naijagists.com

On Thursday, the 30th of August, 2012, Abiodun murdered his own son, Kazeem in Epe area of Lagos.

His arrest followed the incident report the mother of the child, Ronke made to the police.

Abiodun claimed a very mysterious force urged him to kill the child.

Abiodun and Ronke met each other last year, they fell in love and Ronke got pregnant.

The suspect who was already married to another woman with 3 kids wasn’t married to the mother of the deceased child.

On the day of the child’s murder, Abiodun paid a visit to Ronke’s home but felt a strange voice urging him to kill his own child.

“I sent Ronke to go and buy bread. She left the baby with me and went out. After Ronke left, I tried to resist but the force was too strong,”

“I went outside and bought a liquid substance known as Bint El Sudan; a kind of perfume which Hausa people use. I took the substance, opened Kazeem’s mouth and poured it into his mouth. I don’t know why I did that.”

“I do not have any quarrel with Ronke. It was after the murder that my eyes opened. It was the devil’s handiwork and I regret my action,”

After killing the baby with poison, he came back to his senses

In a report Ronke made at the police station, she claimed the baby was foaming in nose and mouth and gasping for breath when she arrived home.

The baby was immediately rushed to a General Hospital in Epe where he was pronounced dead.

Abiodun has been arrested and detained in Panti, Yaba for further investigation.

Obasanjo Warns Boko Haram: “You Can Never Win This War”
My Miraculous Escape From The Hands Of Ritualists In Benin City