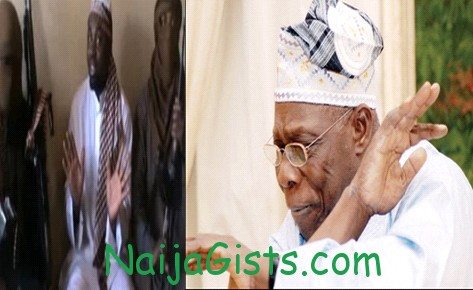 Ex-Nigerian President Olusegun Obasanjo has issued a serious warning to the camp of the Islamic terrorist sect, Boko Haram inflicting terror on innocent Nigerians that their goal of destroying the nation is unattainable. naijagists.com

Obasanjo said the death of the former Libyan dictator, Colonel Muammar Ghaddafi made the Islamic militants to relocate into Nigeria.

He told a British Broadcasting corporation on Thursday that the non-stop killing and bombing by the Boko Haram sect is not connected with issue of bad leadership in the country.

“Now, talking to people who know the history of Nigeria, you will know that you cannot impose any particular religion on Nigeria as a whole. These people cannot impose Shari’a in the North where most of our people are Muslims let alone in Nigeria,” he said.

“Now, they should know that, and someone should make them know that. So I see a bit of naivety in that objective that they have given to themselves and it is an unattainable objective.”

“If you are prepared to kill more people, if like somebody says “we will fight to the last drop of our blood”, now, one does not know whose blood would be the last to drop. How many would they kill, how many of them will survive at the end of the day?

“Those who are on the other side, Boko Haram, and those who believe in their cause or waiting for their cause, know that it is not the war that they can win.”

“But then there are also external elements. Now, the fallout from Libya, which of course as a result what happened in Libya, those that have been trained in Libya in the time of Gaddafi from other countries who are neighbors of Libya, when Gaddafi fell they moved out. They moved out with their training, their weapons and they started to wreak havoc on the communities in which they have moved out to. And that is the situation in northern Mali,”

“We know that there will be a price to pay in the way that it all went in Libya. At the end of the day all of us in Africa, and all those who masterminded the way it happened will have to pay a price, and we are now paying the price “Now it was too early to shout ‘uhuru’ with the Arab Spring, and some of us said that. That look, what will be the final outcome of this? Let us wait and see. When you have violence and violent overthrow of regimes you do not know exactly what the final outcome will be.”(thedailypostreport)