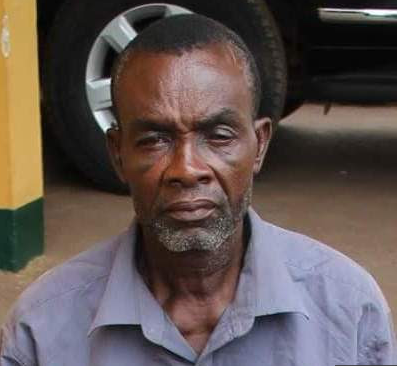 An elderly man, Ogbonnaya Igwe has been arrested by men of the Abia state Police Command for allegedly shooting his lover, Ijeoma Chibuzor, with a double barrel gun over unwanted pregnancy.

While been paraded in Umuahia by the state Police Commissioner, Leye Oyebade, the suspect made an effort to deny the crime.

He said: “Yes. I know the late woman Ijeoma Chibuzor, we were friends and have been having extra marital affair.

“I must confess that the deceased made my life miserable with her continuous extortion and insatiable demand for money when she alleged that the romance has resulted in pregnancy.

“Initially I gave her the sum of N15,000 (fifteen thousand naira), to terminate the pregnancy, but she came back later to demand another N1million(one million naira) saying that there were complications during the process of abortion resulting in excessive bleeding.
“I had to sell my house in Aba to raise the money, but this woman kept coming for more money.

“I cannot explain what happened, I tried to scare her away with the double barrel gun, I did not shoot her. “

But, the Police boss explained that the policemen from Ndiegoro Division rushed to the scene of the incident at 22 Obohia Road Aba when they received information that a woman was shot dead.

On arrival, they met the deceased in the pool of her own blood, the suspect Igwe tried to evade arrest by hiding in the ceiling of his house.

“I want to say that it took the relentless effort of policemen to drag him out of the ceiling to the police station.

“And I want you to know that the double barrel gun with 15 live cartridges has four expended cartridges,” CP Oyenade said.

He further said that the command has embarked on proactive measures to rid the state of all types of crimes and ensure that perpetrators are apprehended.

“The command would not rest on its oars to ensure safety of lives and citizens,” Oyenade added.

Now That Obasanjo Has Rejected His Christian Name, Matthew, What else Do We Call Him?
Osogbo Killer Wife, Mother Of 3 Who Murdered Husband In His Sleep Confesses