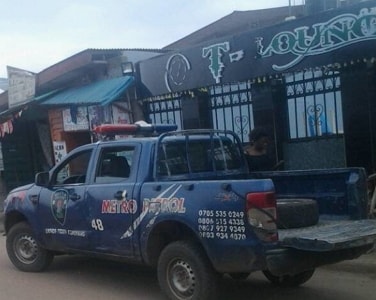 A Lover man, Sozy Adebor, has been arrested for allegedly killing a customer for peeping at his lover in a popular hotel in Lagos.

P.M.EXPRESS reports that the incident happened at the popular hotel known as T. Lounge located at Oladunni Street by Council Bus Stop in Idimu, Lagos.

The hotel has temporarily been shut after the family of the victim identified as Diolu deposited his corpse inside the hotel and attempted to burn it down while protesting over the murder.

It took the intervention of the DPO, CSP Oliver Ezerim, who deployed the police officers that retrieved the corpse and deposited at the mortuary for autopsy report. The police then arrested Adebor and detained him at the police station for the alleged murder.

P.M.EXPRESS scooped that Adebor brought the unidentified lady to the hotel for a sex romp when she went to ease herself and had altercation with the late Diolu.

She went and reported to Adebor that the deceased came to where she was urinating and was peeping at her private part. In anger, Adebor immediately confronted Diolu and they had an exchange of words.

In the process, Adebor carried a stone and hit Diolu on the head; he collapsed and bled profusely. The management rushed Diolu to an undisclosed hospital where he eventually died before the doctor could revive him.

The death sparked a protest before the police intervened and restored peace in the area. The police also stationed two patrol vehicles and armed officers to prevent further breach of public peace.

When our correspondent visited the hotel, it was shut as customers and visitors were not allowed to gain entrance.

At the Idimu Police Division, the DPO was not around to comment on the matter when our reporter visited the police station.

However, the suspect, Mr. Adebor was seen detained in the cell as sources at the police station confirmed the incident and said that it was a case of murder which the Division had no jurisdiction to investigate.

The police source said that the suspect will be transferred to the homicide department at the SCIID Panti, Yaba, for further investigations as the autopsy report was being awaited to determine the cause of the death.

Residents who spoke to P.M.EXPRESS expressed shock over the death and lamented that since the incident happened on Sunday, there had been tension in the area and businesses had been grounded due to fear of possible arrest by the police.