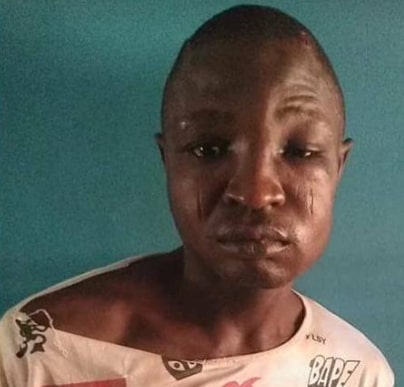 Pictured above is a man identified as Shina Kasali who allegedly killed his wife over the weekend.

The 38-year-old unemployed reportedly engaged his wife, Sofiat in a verbal argument after she accused him of looking at the private part of a sex worker who sat near them at Abosule village in Agbado Ifo LGA of Ogun state on Saturday the 1st of December 2018.

Angered by the accusation, the man was said to have stopped his wife from going to fetch water, which escalated the already tense situation.

He reportedly beat her to death on the spot.

Their neighbour one Tunde Babatunde reported the matter to police.

The suspect claimed to be a butcher and that he has been out of job for some months now and the wife was taking advantage of that to disrespect him.

Small Doctor A Cultist? Lagos CP Calls Him Gangster, Says His Lifestyle Not Worthy Of Emulation
We Killed Our Neighbour To Raise Money For Naming Ceremony – Evil Brothers