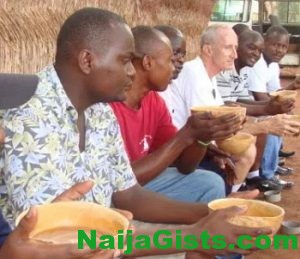 Nanbur Vongtan, a 30-year-old man today re-appeared before a Jos High Court for allegedly stabbing his wife to death.

The offence is punishable with death upon conviction.

NAN reports that the defendant was first arraigned on April 28.

The Police Prosecutor, Mr O.S Osho of the State Criminal Intelligence and Investigation Division, had told the court that the defendant committed the crime on Dec. 23, 2016 at his in-laws’ house at Pligani Village, Langtang North.

Osho said that the defendant used a knife and axe to stab his wife, Hauwa Bali, on the neck and rib which led to her death.

He said that the defendant told the police in a confessional statement that he used the axe and knife to kill his wife whom he has been married to since 2002 and had five children.

Osho quoted the defendant as saying that on Dec. 17, his wife had prepared a local drink (burkutu) which she was selling at the village square and when he tasted it, he discovered it was bad and warned her not to sell it.

The prosecutor told the court that the defendant’s wife disobeyed his orders and sold it.

He said that her attitude annoyed him and he followed her to the market and instructed her to return home and cook for him instead.

The prosecutor said that when the wife returned to her father’s house, the defendant followed her and requested her to return home, but she refused and which annoyed the defendant and he stabbed her to death.

Osho said the offence contravened section 221 of the Penal Code.

The Presiding Judge, Justice Nafisa Musa, ordered that the defendant be remanded in prison untill Nov. 28 for hearing.