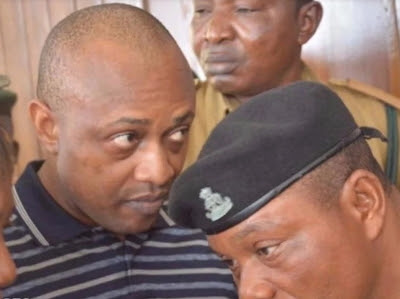 Billionaire Kidnapper Chukwudumeme Onwuamadike, a.k.a Evans, today made a U-turn as he entered a plea of ‘not guilty’ as he was re-arraigned on a two-count amended charge of conspiracy and kidnapping at an Ikeja High Court.

Evans had at his arraignment on Aug. 30 plead guilty to the charges, while other alleged accomplices — Uche Amadi, Ogechi Uchechukwu, the only female defendant, Chilaka Ifeanyi and Victor Aduba denied committing the offences.

They were charged with the kidnap of Mr Donatius Duru on Aug. 30.

The punishment section in the second count of amended charge was changed from Section 271 (3) of the Criminal Law of Lagos State to Section 2(1) of the Kidnap Prohibition Law of the Laws of Lagos 2017.

According to the prosecution led by Ms. P.K. Shitta-bey, the State Director of Public Prosecutions (DPP), Evans and his accomplices committed the offence of conspiracy at 7.45 p.m. on Feb. 14 on Obokun Street, Ilupeju, Lagos.

The prosecution said the defendants between Feb. 14 and April 12 at Obokun Street, Ilupeju, while armed with guns and other dangerous weapons, captured and detained Duru.

The defendants allegedly collected a ransom of 223,000 euros for the release of Donatius.

Before the amended charges were read to the defendants, Mr Olukoya Ogungbeje, the counsel to Evans and Amadi had opposed the reading of the charges to them.

“On behalf of the first and second defendants, we were served with the amended charge this morning.

Mr Joseph Otogbolu, counsel to Uchechukwu, Mr A.A Uzokwu, counsel to Ifeanyi and Mr Emmanuel Ochai, counsel to Aduba, all aligned with the submission of Ogungbeje and asked for an adjournment to ‘confer’ with the defendants.

Mr O. Ajanaku, counsel to Nwachukwu, however, did not oppose the reading of the amended charge to the defendants.

“I am not opposing the charges being read to the defendants, the only change in the charge is just the law and the punishment section.

“I am ready for the charge to be taken and to go on with the trial,” he said.

Shitta-bey, however, opposed the request for adjournment by the counsel to the defendants.

“I will be opposing the application for adjournment, the court should allow the charges to be read to them and their pleas taken.

“Section 155(1) of the Administration of Criminal Justice Law of Lagos State does not allow any formal application from the prosecution to amend charges.

“All the court needs to do is to take fresh pleas from the defendants,” he said.

The DPP also told the court that the state was ready to proceed with the trial and that three witnesses were already in court to testify.

Justice Hakeem Oshodi stood down the case for 45 minutes till 11.45 a.m. to enable the counsel ‘confer’ with the defendants.

Earlier, proceedings took an interesting turn when a dispute arose between Ogungbeje and Ajanaku after they had announced separate appearances to represent Nwachukwu, the fourth defendant.

“We are the counsel in record for the fourth defendant, if a new counsel in form of my legal colleague is coming into this matter, he should have filed the proper applications.”

“The last time this case came up, as a matter of expediency, my learned colleague appeared in court for some of the defendants in the case.

“Not too long ago, I was approached by the family of the fourth defendant to stand in for him which he can attest to.

“This is a criminal matter, if my learned friend is offended I apologise; I approached him this morning in court as I don’t know his address.”

In resolving the issue, Justice Oshodi told the court that Nwachukwu should be asked who is his counsel of choice because under the law, a defendant in criminal matters is entitled to a counsel of his choice.

When asked who was his preferred counsel, Nwachukwu said “It is Ajanaku.”

When the court resumed after the stand-down, the charges were read to the defendants and their pleas were taken.

Justice Oshodi adjourned the case until Nov. 3 to enable the defence to prepare for trial.

Continue Reading
You may also like...
Related Topics:evans the kidnapper, not guilty, plea