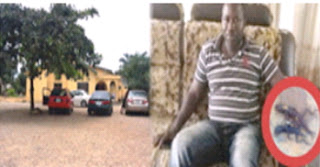 A business man identified as Edward Asuelimen a resident of Kubwa community located on the outskirt of Abuja and his family members recently got the shock of their lives when he vomited two live lizards on his hospital bed. naijagists.com

Here is the full story.

“I woke up a few minutes after 5 am on July 16, 2012. In less than two hours, I had visited the toilet four times. Then I felt excruciating pain in my stomach. It got to a point where I could hardly prepare my children for school,” Asuelimen recounts.

His wife was bothered however he gathered strength and took his children to school.

On the way to his kid’s school, he felt a very terrible pain and branched at a local drug store to get pain killers.

Few minutes later, he could barely walk, he grabbed the walls for support.

“I prayed hard to get back home. Anybody who saw me at that point wouldn’t have believed that there was something wrong with me,” he says.

Asuelimen started praying and speaking in tongues and at a point, the pain could not permit him to leave his car.

His wife suggested that he should go to the hospital.

He was admitted at Unity Clinic and Maternity home.

“I had never experienced that kind of pain before. I was merely hanging on with all my strength and faith in God. At the hospital, the medical director and his staff were already having their morning devotion.

“When my wife called the doctor and he helped me to come out of my car, the only thing I could say was, ‘my tommy, my tummy’ I was given an injection and somebody stayed with me, all the while praying as the rest continued the morning devotion.

“The Holy Spirit pushed me to speaking in tongues at that point. Not long afterwards, I felt a strong urge to vomit and I did.”

Few minutes later, he vomited two live lizards in the hospital an incident which caused tension among the hospital staffs and other patients present.

“When my wife tried to get something to clean my mouth and pack it, I saw a lizard crawling out from the vomit on the ground. The nurse that attended to me saw another one and wanted to kill it,” he says.

When he saw the lizards, the first thought that struck him was that he had been poisoned. But the pain ceased after he vomited the reptiles. The doctor told him that he had just received divine healing.

“I got well almost instantly. Even I joined the hospital staff in burning the lizards. I went home had my bath and continued the day’s business as if nothing had happened to me,” he says.

“I am not a medical doctor, and I know that it cannot be proved scientifically. I know that faith is older and stronger than science. The faith we are talking about is God himself. God is the creator of the universe, so invention and science itself is dependent on God.

“Some things are real and beyond proof. We don’t have to subject God’s miracle and existence to scrutiny. It does not make sense because I know there are many things that God can do, which science cannot prove. I am talking about divine healing and miracles in particular. The fact that science cannot prove it does not mean they are not real.”

The Medical Director of Unity Clinic and Maternity, Dr. Stephen Nwaedozie, confirmed the incident. He says, “When I got to the car, I saw Edward writhing in pain. I brought him out of the vehicle and attended to him. We started praying for him. Not long afterwards, my nurses told me that he had vomited lizards.

“I personally burnt the lizards and poured anointing oil on them and buried the carcasses. As soon as we did that, the man recovered from the stomach pain. He is a child of God and with faith he told them to bring him to my hospital and when he came here, God delivered him. So we praise God.”

Nwaedozie admitted that there was no way science could explain the appearance of the lizards in Asuelimen’s vomit. “If I was not there and it didn’t happen right before me, I won’t believe. So that is why we have to tell the world the truth,” he says.(punch)