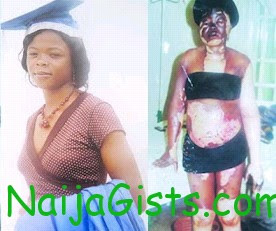 A 27-yr old woman identified as Charity Okoroukwu who graduated from IMT, Enugu is currently struggling to regain her beauty back as a mystery kerosene lantern explosion disfigures her body 11 days to her wedding. naijagists.com

In December 17 2011, Charity was hit by an explosion while attempting to refuel a kerosene lantern. She suffered third degree burns all over her body.

The fire, which disrupted her life, did not affect the keg containing the kerosene. At the time, the native of Awka North Local Government Area of Anambra State was awaiting mobilisation for the mandatory national youths service scheme.

Now, she needs more than N2 million for a plastic surgery. Charity, fondly addressed as ‘Chacha’ by her friends at the IMT, told Daily Sun: “When I was in the IMT where I graduated on December 6, 2011, I was popularly known as Chacha. Few days later, I left Enugu for our village in Anambra State to prepare for my wedding that was to hold on December 28.

On December 17, which was exactly 11 days to my wedding ceremony, I wanted to put kerosene in one of our lanterns and it exploded. So, the fire burnt my body without mercy. “People that were around poured water on me and I was rushed to a nearby hospital. I was later transferred to another private hospital in Awka. I spent more than two months there before I was discharged.

My bill at the hospital was well above N500, 000. In spite of the treatment and the money involved, I was not okay as at the time I was discharged,” she said. Charity, who noted that she was five months pregnant when the fire burnt her, stated that the wedding was held in the hospital. Her husband, according to her, insisted that the wedding must be held to shame the devil. She continued: “After that, my husband, who has been residing in Lagos, asked me to come. When I got to Lagos, we went to the Federal Medical Centre (FMC), Ebutte Meta.

At the FMC, I registered for ante natal. Shortly thereafter, we were referred to the Lagos University Teaching Hospital (LUTH). “I was admitted when I got to LUTH and I was subjected to series of tests. In the hospital, I had my baby through caesarean section because of my condition. We named the boy Victor Chidera. Victor means victory and Chidera means what God has written. I gave him the name because of my condition and the circumstances, surrounding his birth.”

Charity appealed to kind-hearted Nigerians, philanthropists and corporate organisations to assist her so she could undergo a corrective surgery in Israel. “Please, help me because I don’t like my present condition. Now, I cannot stay wherever is hot. I must stay indoors in the afternoon because of the sun.

Please, help me. I pray that neither you nor your children will have this kind of experience. The explosion has spoilt my beauty.” Charity’s mother, Mrs. Grace Nnamezie, described the incident as an attack masterminded by evil forces. “How could the fire burn my daughter and didn’t touch the keg, containing the kerosene?” she wondered (sunnewsonline).

Evil is real but the ultimate is that God is even more real!

Hopefully she gets the help her soul deserves.