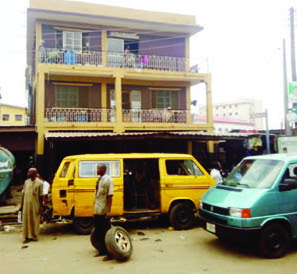 Some suspected armed robbers have killed a 39-year-old man, Sanmi Ige, an engineer with BHS International Limited, when they invaded his residence at Oloto Street, Oyingbo area of Lagos State. It was learnt that the robbers shot the victim in the head while pleading with them to let go of his laptop.

The robbers, wielding guns and machetes, stormed the victim’s house, a-storey building, about 4a.m. yesterday. Witnesses said the robbers announced their presence in the landlord’s wife’s apartment by waking her son up with machete. The robbers dispossessed the residents of their phones, money and also stole a Plasma television.

Thereafter, they proceeded to Ige’s apartment by cutting through his door net. It was also learnt that the engineer surrendered his phones and other valuables, but held onto his laptop, resulting in a struggle between him and the gunmen. The robbers overpowered him and collected the laptop. He was said to have followed them downstairs and was shot by the roadside. He bled to death on the spot.

The landlord’s wife, who identified herself simply as Mama Muri, said the robbers came in about 4a.m. According to her, they probably used a master key to open the gate to the compound.

“Immediately they gained access into the compound, they woke us up, thoroughly ransacked our room and collected our phones and money. There was a young boy among them.

“They warned us not to make a noise. They locked us inside and went to Ige’s apartment. They collected his three phones and laptop. With only boxers on, he followed them downstairs, begging them to return the laptop. Suddenly, we heard a gunshot. On getting downstairs, we found him in a pool of blood.”