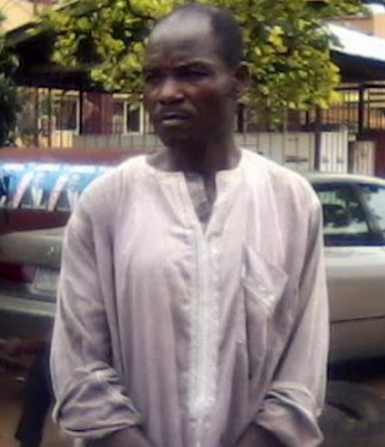 See the confession a 46-year-old man identified as Baba Mohammed who was accused of raping a minor few weeks ago.

“I was given a charm from one man in Maiduguri, Borno state, the man said I should rub it ‎on any girl of between 10 and 11 years of age and then sleep with her thereafter ,I will have lot of wealth thereafter.

However, Baba Mohammed , a married man with a child blamed his action of “Devil” and regrets his actions.

The raped girl, who spoke to journalists under plea of anonymity ,revealed that the suspect threatened her not to ever reveal what happened between him and her to any person . She also disclosed that the suspect always give her fifty naira after sleeping with her.

‎Meanwhile, the father of the girl, Usman Adamu who insisting that justice must be done on the behalf of her daughter also narrated how the suspect was caught in his room defiling his daughter.

He narrated, “I was in Kawo when the my elder daughter called me to inform me of the happening, upon reaching home she told me what happened, she said she came home and met the door locked from outside, she had to knock severally before the door was opened and only to find the man with her sister.

According to him, the rapist has defiled his daughter and must punished severely.