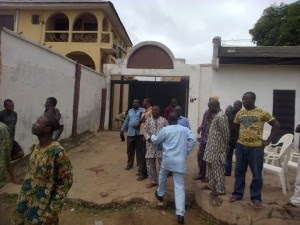 An Abeokuta-based oil magnate, Mr Akeem Lawal, 36, was kidnapped and shot after the kidnappers were paid N30 million as ransom.
The incident happened while he was on his way to his home after the day’s business.

The Ayetoro-born Lawal, who owns Alak Vision Filling Station in Abeokuta North local government area of the state, was reported to have been abducted by a four-man gang of kidnappers around 6:30 pm a few days to his trip to Saudi Arabia for the hajj exercise.

He was among the intending pilgrims to this year’s hajj as he had completed all arrangements and was shortlisted among those to leave the state on 11th September before he was abducted.
Our correspondent reliably gathered that he spent three days in the hands of his abductors.

It was further gathered that his abandoned SUV was seen along Ilaro road the night he was abducted.
Furthermore, it was gathered that he was beaten blue black and later shot by his abductors.
A very close friend of the man told our correspondent that a ransom was paid before he could be released.
“I can confirm to you that Alak was kidnapped on his way home on the 9th of this month and he was released the third day.

“God is in total control. He has never been to hajj and he has been preparing for this exercise. He had done everything needed to be done, payment, screening, medical and what have you. Two days for him to leave the country for the holy land, he was kidnapped.

“Who knows whether if he had gone, he would have been among those that died in the crane incident in Saudi Arabia. For every disappointment, God has a reason.
“He was later shot in the left side of the chest. Only God saved him, we thank God for his life. He has been operated and is now recuperating in a private hospital in Abeokuta.

“The police are now trying to arrest the culprits. I want them to do more to ensure that all these devilish people are dislodged from the state,” the source explained.

Our correspondent gathered from another close friend of the victim, who pleaded anonymity, that he is currently at a hospital in Abeokuta.