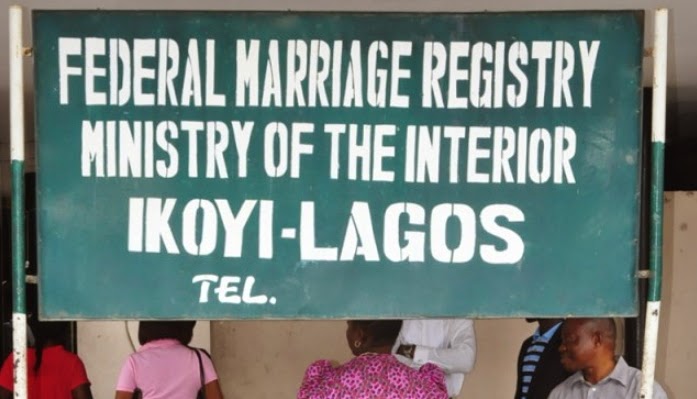 A man is currently cooling off in police detention after he abandoned a lady at the Ikoyi marriage registry and escaped with her four million naira.

Emmanuel who proposed to wealthy Victoria few months ago dumped her at the court premises during their wedding and escaped with her 4M Naira.

Friends of the couple, who attended the wedding ceremony were left shell-shocked as marriage officials cancelled the wedding.

A source told our correspondent that the relationship between, Adeleye and Emmanuel blossomed after they met at a church in Isolo.

Unknown to Adelye, Emmanuel was married with three kids. He told her that he was still single and needed to marry since he was growing old.

Adeleye who was also eager to get a husband, showed interest and became an intimate friend with Emmanuel.

Shortly after courtship, Emmanuel proposed to marry her and she accepted. He reportedly moved into Adeleye’s flat at Bola Adeyinwa street Aswani, Isolo where they started living together as a couple without the knowledge of their pastor and members of the church.

To cover their tracks before the church, Emmanuel suggested to Adeleye they need to go to court to consummate the relationship legally.

Adeleye agreed and brought out some money with which they used to facilitate the marriage but on the day they were supposed to tie the knot, Emmanuel carried out the last of his plans.

The duo had arrived the registry with close friends but while they were waiting for court officials to commence the ceremony, Emmanuel excused himself and went outside the registry. From there he fled with her money and did not return to the hall.

The suspect was later arrested following a tip off. He then confessed that he had a wife with kids and she was only interested in Adeleye’s money.

He was charged before Isolo Magistrate’s court for obtaining under false pretence and stealing under the Criminal Code.

When he was arraigned, he pleaded not guilty. The presiding Magistrate, Mrs F.M. Kayode granted him bail in the sum of N500,000 with two sureties in like sum.

He is remanded in prison custody at Kirikiri, Lagos pending when he will fulfill his bail condition.

The matter was adjourned till 2 October 2014 for trial.

Police sources said his wife refused to show up to facilitate his bail, saying what he did to the woman was bad.