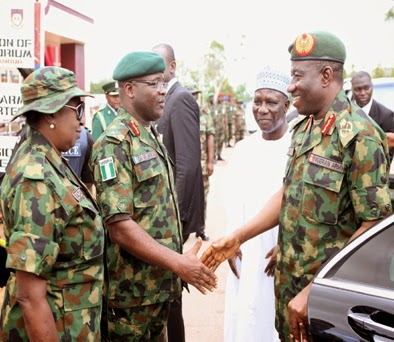 The President of Nigeria, Goodluck Ebele Jonathan’s chief Boko Haram negotiator, Dr. Stephen Davis has named the President’s appointed ex Army Chief, General Azubiike Ihejirika as a chief sponsor of Boko Haram, the world’s worst terrorist organization. More than four days after the revelation, the Nigerian government has not denied the damning revelations. We doubt they have the capacity to.

In view of this, it is becoming sickly obvious and clear to Nigerians that this so-called Boko Haram ghost organization is more than just some of the most ingenius people, able to hide in jungles for years and lead well armed formations of dozens of vehicles to assault the citizens of the north; but a permitted, tolerated and supported organization on a mission on behalf of Nigeria’s army chiefs.

Boko Haram has been supported by the army chiefs to decimate farming and farmers of the north. If General Azubuike Ihejirika is a sponsor of the terrorist group, it explains why there were so many reports of the Nigerian military suspiciously pulling out hours before many Boko Haram attacks on farming villages in the north and only returning after over 8 hours sometimes, when Boko Haram was sure to have finished killing every living thing they found in the village and burning all structures.

General Ihejirika is now understood to have been behind the systematic transfer of Nigeria’s military tanks, Armored carriers and weapons to Boko Haram terrorists; which has been going on throughout the Jonathan administration. The people of Kala Balge knew this and when they defeated Boko Haram and re-captured two light weight tanks, they rather burned them than gave them to the Nigerian army under Minimah when he came to ask for them. The people said they know these tanks will be given (or sold) back to Boko Haram. Nigerian military helicopters have been reported supplying Boko Haram in Sambisa forest to support the Boko Haram terror pogrom on the northern farmers. It must be mentioned that as Boko Haram’s secondary agenda is the displacement of farmers and freeing up of fertile farm-land; some top dogs also want the land of the north and we can expect a money flow and people buying up the land right now. 4 million farmers have thus far been displaced in the army supervised pogrom.

Even in the killing of Boko Haram terrorists in large numbers which some believe is a defense of the military chiefs, what was actually happening was a systematic controlled genocide. The army chiefs sponsor the key Boko Haram leaders who forcefully conscript innocent northern youth and then the army kills these youth, never thinking of a way to protect the youth before they are trapped, or to rescue them, but leaving them with the terrorists till they become one with them as they recently did as we all witnessed with the abducted 234 Chibok Angels. This cycle continued indefinitely. The army allows Boko Haram to go again and raid a village and conscript its youth, then the army kills the youth, while leaving the Boko Haram well known head offices/camps in Sambisa un touched. In this fashion, the army continues to maintain a supply of northern youth to be killed via its cooperation with its pal Boko Haram top leadership.

Boko Haram as definitely on a mission of genocide and that means the military chief was behind a genocide of citizens in Nigeria’s north. This is what the famous ex Navy Admiral, Governor Murtala Nyako Genocide memo of April 2011 stated. Being an ex-navy officer, former Adamawa governor Murtala Nyako probably read the signs on the wall clearer than the rest of us could and alerted the world that what was happening in his state and the neighboring states in Nigeria’s north followed the full characteristics of a government sponsored genocide. When the governor was to be impeached as the first and only yet governor to be impeached under the Goodluck administration; he reportedly said that the conditions for him to keep his job, were to denounce his memo, but even if death were put before him, he will never denounce this memo because he believed and stood by it. The Governor had always accused someone in the Office of National Security, NSA as being involved in Boko Haram terror. Nigerians are now realizing that Admiral Nyako knew precisely what he was talking about.

The President is today also responsible for the careless and terror facilitatory actions of the new Chief of the army, General Kenneth Minimah, including the current army facilitation of Boko Haram in continuance of the Ihejirika agenda and the murder of not only innocent citizens in Borno, but also that of the three sons of a prominent Islamic leader in Nigeria, Sheikh Zakzaky in Kaduna and other innocent Nigerians in the Kaduna provocation and elsewhere. It is time for culpability.

We urge and expect the citizens of Borno, if not those of the entire federation to gather together and class sue the President of Nigeria for crimes against humanity; for perpetration of terror; for employment and protection of a terrorist; for support and facilitation of terror. We expect human right lawyers in Nigeria and around the world to take up this case and make it happen.

May the Good Lord continue to hear the prayers of the abducted Chibok 234 Angels and continue to bring shame and death to their oppressors. Amen, Amen, Amen.