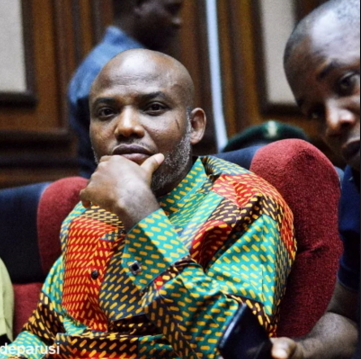 Mazi Nnamdi Kanu who is currently facing treasonable felony charges in Nigeria has petitioned the government of his second country, UK to come to his rescue in Nigeria.

The British-Nigerian citizen petitioned the UK Government in a 5-page letter he titled:

Nnamdi Kanu: A victim of travesty of justice and a call for the British Government to be on the watch

The letter signed by his lawyer, Barrister Ifeanyi Ejiofor reads in part:

“We are counsel to Nnamdi Kanu, the 1st defendant in the above captioned criminal charge, hereinafter refers to as “our client”, and on whose authority and firm instruction, we formally bring to the attention of the British Government the deliberate design by the Nigerian Government to subvert the course of justice in the above criminal trial.

“It is repeating the obvious to state that our client is a full British citizen, by virtue of which position he is entitled to all rights, privileges and protections, guaranteed under British Laws and conventions.

“We are, therefore, constrained in the circumstance, to formally notify the British Government vide this medium, of our well informed reservations, and apprehension, that our client is undergoing persecution in the charge above referred, and deliberate design by the persecutors to frustrate every effort of the defence team aimed at giving our client a fair trial…

“It is, therefore, our humble expectation that the demonstration of palpable commitment by the British Government will, to a larger extent neutralise concerns and fears raised by the remark under reference.

“We most humbly request the British authority to begin a race against time, for more noticeable impact in this matter” .

The British-Nigerian pro-Biafra activist was arrested in Nigeria last year October days after a video of him ordering people to take up gun and fight Nigeria went viral on the social media.