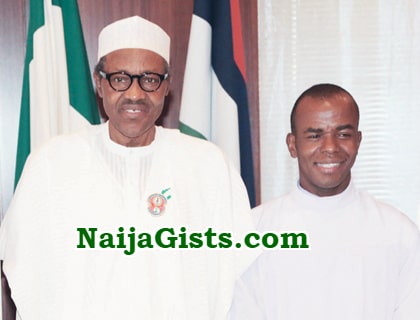 In his New Year’s Even message, Mbaka, said the type of difficulty the country would face is such that had not been witnessed in its history.

While praying for the country and its leaders, the fiery priest enjoined Nigerians to support President Muhammadu Buhari to continue to fight corruption.

He said the Catholic Church supports the anti-graft war, and so created prayers against ‘bribery and corruption’.

The cleric praised Enugu State Governor Ifeanyi Ugwuani, and solicited for his re-election.

“A President that is fighting corruption should be supported. I will not greet everyone without praying for our governor and friend, Ifeanyi Ugwuanyi. We bless God for him. Enugu has never seen it like this. For the first time in the history of Enugu, the Black Axe and Vikings cult groups are not fighting, only a man like him can do it.

“For such person who is doing well, we will tell him to continue. I pray for God’s protection in his life. If it is endorsement you call it, it is your word.

“Those coming to contest know that Ugwuanyi is a good man, otherwise they should be imprisoned. I pray that Senator Ayogu Eze should go and rest, he should not contest for anything, he should not come to disorganise the state that has been rebuilt. As he is going to rest, let it be well with him in the name of Jesus Christ so that after the election, he will be given an appointment and he will go to Abuja.

“You will not understand what Governor Ugwuanyi has done, he is a silent performer. A humble and God-fearing, and kind-hearted man, and nobody will stop the good work he has started so that nobody would be killed because of election. He should complete the work he started. Is it the man who did not built a road when he was a senator that you want to be governor now?

“We pray for President Muhammadu Buhari; he is a man who understands the situation. Since Nigeria started, we have never experienced a President that has agricultural programmes like him. It’s like calling somebody thief in the media but you are not a thief.

“For 16 years, the road from Anambra to Enugu was overgrown with weeds but within four years, the road is being rebuilt. For remembering us, God will bless him. It shall be well with him. Four years doesn’t mean eight years; he has finished his four years and I pray for peaceful transition that he may complete his remaining four years.”

Continue Reading
You may also like...
Related Topics:Buhari, mbaka, relection