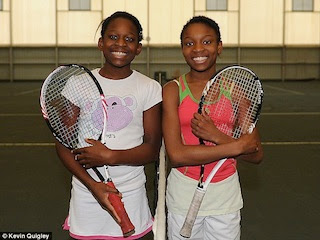 Destinee and Essence Martins are the new Venus and Serena Williams, cloned from Nigeria.

The 11-year-old twins are very promising and could rule tennis a decade from now. Born in Britain, the twins were discovered in Edgware, at a public park in North London.

Their father David Martins is a computer software analyst who is currently out of work and is originally from Nigeria but settled in the United Kingdom 25 years ago and met his wife Sheri, who is from Manchester.

David’s girls are already attracting interest. Major manufacturer, Gosling GTC Centre in Welwyn Garden City has given scholarships to the where they get four hours of education and some time for practice.

Destinee have started very well racking up all the national titles in her age group since she started playing and appears to have an uncanny tactical awareness, but Essence is yet to find her winning formula although she has similar ability. 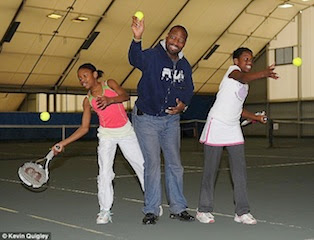 The twins with their father

Their father only learnt tennis rules by reading but it seem he has discovered gold in his home.

“I have never played tennis and have learned it by reading books and studying videos. I tried my elder daughter Bernice out with tennis but she was not interested.

When the twins were six I took them to the park and it was quite different, they loved it from the start. I use my skills as a software analyst and apply them to tennis training. Some people think I’m a little bit mad,” he said.

Clint Coleman, a director of Global Tennis Connections who has about 30 years experience in British tennis as player and coach believes that he has identified genuine talent that would put Britain on the international radar.

“The only ones comparable to Destinee at that age are Laura Robson and Anne Keothavong. What makes these two sisters so interesting is that they have had so little formal coaching,” he said.

Destinee’s success has particularly caught Coleman’s attention and that of other coaches. Technically her style is similar to Serena Williams, her role model. “I love how she uses her serve and builds a point. She will hit a cross-court forehand and then go down the line,” she said. source