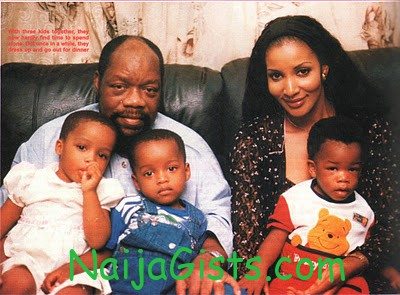 The will of the late Ikemba Nnewi, Chief Chukwuemeka Odumegwu-Ojukwu, was on Friday presented to the family with his widow, Bianca, getting the lion’s share.

In the will, the late Ojukwu identified one Tenny Haman as one of his children.

Ojukwu listed the children as;

The Ikemba gave the Casabianca Lodge at 7 Forest Crescent, GRA, Enugu, two property at Jabi and Kuje in the FCT as well as all his money and personal effects to his widow.

He also said that Bianca should replace him as the trustee in the family company, Ojukwu Transport Ltd, while also giving her two plots of land in his village at Nnewi. He, however, added that if she re-married, the land should be taken away from her.

The first son, Emeka Jnr., got the family house at Nnewi, while the newly mentioned daughter, Tenny Haman, got the Jubilee Hotel located in Zaria, Kaduna State.

The Biafran warlord also shared other landed property in the village among all his children.

Ojukwu listed the trustees and executors of the will to include Bianca, Emeka Jnr and Mr James Chukwuneme.

Reacting to the will, Bianca, who is Nigeria’s Ambassador to Spain, expressed satisfaction with its contents.

“It was a fair will. This time round, he did not disappoint us,’’ she said.

The ambassador, however, expressed shock at the disclosure of a new daughter in the family, whom she said had never been mentioned by her husband.

None of Ojukwu’s children was present at the presentation of the will.

A man who claims to be Ojukwu’s first son has already filed a legal action in a Lagos court on the will.

Chief Debe Odumegwu Ojukwu who claimed to be the eldest child of the late Ojukwu had slammed a N100 million suit on his father’s widow, Bianca and six others, accusing them of preventing him from managing his estate.