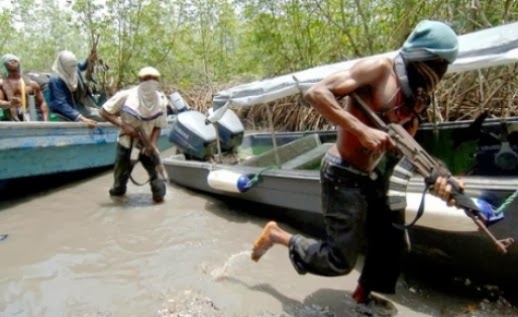 MEND, a Niger-Delta based militant group has claimed responsibility for a violent attack on JTF patrol boat over the weekend.

A military patrol boat was attacked last Saturday in the Nembe Bassanbiri waterways in Bayelsa State.

This is what the group said in a statement on Sunday:

“This relatively insignificant attack is a reminder of our presence in the creeks of the Niger Delta and a sign of things to come,”  “Contrary to speculations, they were not “sea pirates”, but a new group of MEND ‘Trainee fighters’.”

It further stated that its silence thus far has been strategic and that at the right time, it will reduce Nigerian oil production to zero by 2015 and “drive off our land, all thieving oil companies.”

“In this new phase of our struggle for justice, the Movement for the Emancipation of the Niger Delta (MEND) will pay considerable attention to dealing with the occupying Nigerian government forces in the Niger Delta that stand in our way.”