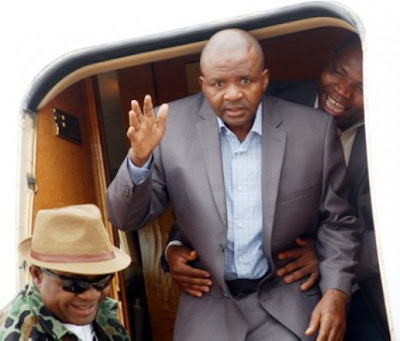 The Governor of Taraba State, Danbaba Danfulani Suntai has returned home to Nigeria amidst controversy on his mental health.

The governor landed in Abuja on Sunday August 25, 2013 after ten months of intensive medical treatment in Germany & the US.

Governor Suntai was rushed to a German hospital last year after his cessna Plane crashed in Yola on the 25th of October 2012.

The impact of the crash has affected some part of his brain.

Even though he appeared physical ok, sources claim his mental health is questionable.

Suntai arrived at the old wing of the Nnamdi Azikwe International Airport, Abuja at about 1.10p.m.

Curiously, he was aided to alight from the aircraft and an aide also held him as he vacuously waved, at the door of the plane, to people at the airport.

Suntai did not also talk to newsmen but one of his associates, John Dara, said that the governor was mentally alert as against speculations that he had lost his memory.

“We were excited to see him and it is understandable that after the long trip, he was weak and tired. But, we were thrilled by the fact that he recognised everyone by name which shows that he is mentally alert and lucid,’’ Dara said.

He noted that the governor’s mental alertness indicated that he was capable of taking over the affairs of the state.

“That itself is a clear indication that he is capable of running the affairs of Taraba as the governor. We had no doubt in our minds that when he gets back to Jalingo today, it will be up to his doctor to say whether he will resume today or in a couple of days to come.

“But he is clearly okay and able to function,’’ Dara said.

He said that the governor’s decision not to talk to newsmen might be because of the long journey.

“Talking to newsmen can be spontaneous and organised. So, we felt that when he has rested well, it will be easier for him to address Nigerians,’’ Dara said.

Another close associate of Suntai, Rima Shamulu, said the decision to take over the ruling of the state lies with him, in line with the provisions of the constitution.

“There are provisions in the constitution for you to take over or not to.

“And if he gets back to Jalingo today, and he transmits a letter to the state assembly through the speaker that he has arrived, that is all; he can take over as the governor.

“So, I don’t know why there are speculations around because there is constitutional provision when someone becomes too sick to function; it is not for us to speculate.

“And with the way I saw him, he is alright,’’ Shamulu said.

After the plane crash, Suntai was rushed to Germany where he was flown to John Hopkins Hospital in the United States.

Sources claim the Governor is mental unstable and can’t rule the state without aggressive backstage intervention.

Check out more photos of his arrival below; 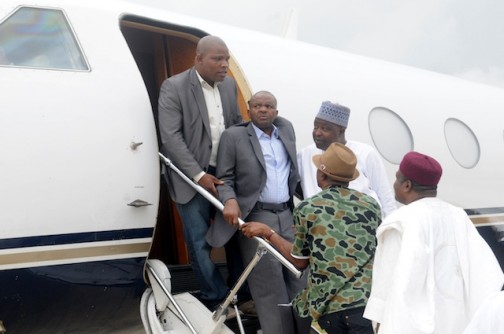 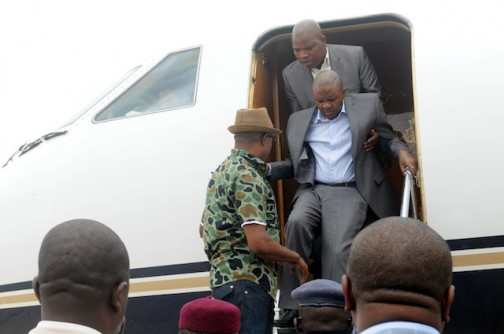