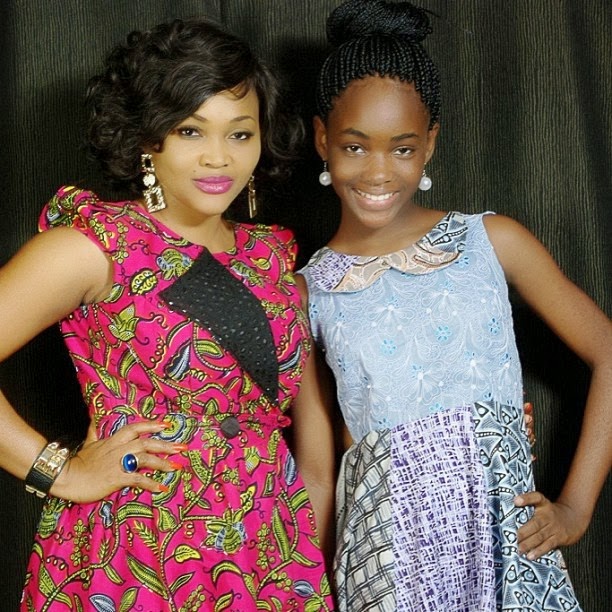 In this recent interview with Motherhood magazine, Nollywood actress Mercy Aigbe Gentry talked at length about her marriage, husband and teenage daughter.

On Marriage and Husband:

I’m married to Ashiwaju Olanrewaju Gentry and together we have two beautiful kids.  I always tell people that I married my own husband because he has been awesome. He is mature and just a very fantastic person. He is always there for me and supports me all the way. He has actually helped me to achieve my dreams. With his help and God’s, I have been able to do so many things. I’m just blessed. I always say when you see a married woman doing very well that means she has a very supportive husband. Most Nigerian men don’t want their wives to outshine them, maybe it’s ego. I don’t know. They always want you to be dependent on them for everything you want but my husband believes in me and gives me total support. My celebrity status doesn’t even bother him, he just sees me as Mercy.

He is a wonderful dad. I always tell him ‘Look you spoil kids too much!’ I’m the disciplinarian in the home. He’s hardly tough on his kids and doesn’t believe in smacking. He stands up for them when I want to smack them sometimes. He’s just a very fantastic father.

On rumours of her being a second wife:

I’m the only wife, one and only. No rival. He has been divorced since. I met him as a divorcee.

On her relationship with his other family:

He has three beautiful daughters and I have a fantastic relationship with them. Even with their mum. They are my kids too. There are times when they go on location with me and assume the role of my P.A while on set. We do everything together, we’re fantastic together. They call me their second mummy, they actually use the word ‘small’, they call me ‘small mummy’. So their mum is ‘big mummy’ and I’m ‘small mummy’. They use the word small because like them I’m also in tune with today’s trends. Their relationship with my kids too is very good.

On her former marriage:

Actually I’ll prefer not to talk about it but looking back, I thank God for where I am today. I would say it’s not that there was something both of us didn’t do right. The only issue we had was his mother, she just didn’t want me to marry her son because I’m not from the Igbo tribe. That was just it. We actually tried to convince her and all that but when it wasn’t working, I just felt I had to leave.

On her growing 14-year-old daughter:

There was a day she came back from school and was like ‘Mummy somebody got expelled in my class for giving someone blowjob’ and I just exclaimed ‘Blow what? You know what that is?’ She just laughed and said ‘Mummy, you don’t expect me not to know that.’ You know, that opened another room to educate her. As often as possible I have to talk to her about boys. Teens need sex education. She is growing up so fast, so I need to tell her all she needs and wants to know so she doesn’t get it all mixed up.

On having domestic staff:

Ah, it’s God. Only Him can help working mums. I make sure I check whoever I’m employing properly. I do the health check, a little bit of background check to assess the person’s personality and values, and the rest I leave to God. I monitor my domestic staff, even when I’m not around. Mums can’t afford to be lazy about that. I must add that I have a very good support system.