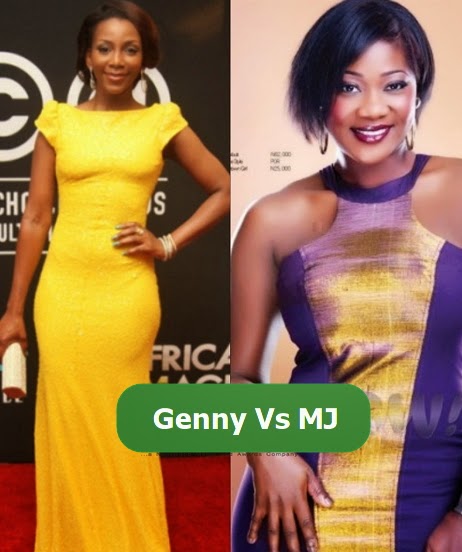 August 25, 2014 – Mercy Johnson Narrates How Her Mentor, Genevieve Nnaji Made Her Cry The 2nd Time They Met

Though she has been regarded as the most paid Nollywood actress of all times, yet she has come low to recognize those who mentored her when she just joined the movie industry.

Nollywood actress Mercy Johnson in a recent chat with City People narrated how Genevieve Nnaji’s presence brought her to tears.

Read what MJ said about her first and 2nd encounter with Genny below:

“Ahh! The first time I met her, my friend took me there. When we got to where she was, I became nervous. I told my friend “no let me hide in your boot.” And I did. I got into her boot. (laughs) Can you imagine I came to see her and when I got there I wanted to run back. I jumped into my friends boot. So, when she came out of the hotel, I could not see her, I could only hear her voice.

The 2nd time I saw her was on set. When she came down and I met her she said ahh! Mercy I like your movies and I started crying. I was in tears of joy. I said Aunty Genevieve, so you watch my movies. She was sort of embarrassed. Before I met her, she had already known that there was somebody who was crazily insane about her. She was really nice to me, receptive. And even whenever we work together she will correct me and say that thing you did, you could have done it this way.

Usually, in life, you will know somebody, who is more than you. Give him or her that respect. You can’t fight a battle you can’t win. It does not make any sense. If somebody is much more than you, there is nothing as big as you admitting it, and hearing from that person. I didn’t come into the picture to compete with anybody. I didn’t come into the picture to rub shoulders or outshine anybody. I came to learn, do it well, make it and be there.”

“I really don’t know. I love Genevieve a lot. Growing up I discovered myself on time, I got to know my potentials. I got to know my weaknesses and I respected them. So, I didn’t really look at anybody as a threat, because the field is big enough. It is so large. All you have to do is make your footprint matter and people will come. You don’t force the fans to like you. In my entire career nobody for me has been worth my distraction or was enough to be a competition for me. It is do your thing I do my thing. We have different physiques, different voices. Let the fans choose, who does it better. It is only those who don’t know the meaning of self-realization that will begin to see someone as a threat. I never did see anybody as a threat. I saw my seniors as a pathway for me to learn from, not as a threat. I didn’t come into the industry because I wanted to take over from them, because there is no movie I will do that will measure up to what they had done.”

There is no acting I will act today that Genevieve has not acted. So, it was more like I want to learn from you, and I want to better myself for me, not because I want to edge you out. The industry is so large that only one person can’t occupy it. It is when you don’t understand who you are, when you have not realized self actualization, you don’t know who you are, that is when you begin to see people as a threat, or as a competitor. That came up at a point in my career. It came up and it even made me stronger and bigger. Nobody was actually worth my distraction, or strong enough to be a competition for me.

The interview is a response to the rumour making round that she has upstaged Genevieve Nnaji and has become the most-loved Nollywood actress.

Mercy Johnson is such a wise woman. Genevieve must have felt good after reading this.

15 thoughts on “Mercy Johnson: How My Mentor Genevieve Nnaji Made Me Cry The Day We Met”