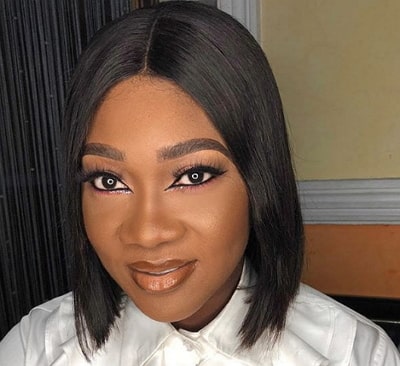 The location was an African store in Randallstown, Maryland, USA.

Since social distancing is also observed at the store, there weren’t too many shoppers present.

All eyes were on her as she walked into the African food store in company with her little daughter.

“Oh my! Mercy Johnson!” a voice said among the shoppers and quickly walked up to her. A black American guy, other shoppers watched as the star-struck man told Mercy Johnson that his wife, a Nigerian, is a fan and had desired to have a photo with the Nollywood star.

According to him, since his wife was not at the store, he asked if Mercy would have him take photos with her which he would show to his wife when he got home.

“I don’t know you”, Mercy said rudely and left.

Everyone at the store felt for the guy, who was obviously embarrassed by Mercy’s behaiviour.

A Nigerian, Demola Babalola, who was one of the shoppers, disclosed to Kemi Ashefon that Mercy’s action was entirely rude and unexpected of a star.

“You people should be talking to your Nollywood stars. I just ran into Mercy Johnson at one African store in Randallstown, MD about 10 minutes ago. One black American guy, apparently married to a Nigerian, asked MJ for a photograph together, she declined and talked rudely to the guy.

“I don’t know you,” she told the guy and rebuffed explanation by the guy that it was his wife who knows her. She waived the guy. The black guy was muttering over the way she treated him all through while we were at the check-out counter. Not that she must agree to having to take photos with him but there are polite ways to reject such without being seen to be rude. She’s a star for God’s sake!

“Thank God I’m not the type that asked for photographs she could have been rude to me too. I was elated to see her because she’s one of my favorite Nigerian actresses. Maybe she’s touchy because she appears to be pregnant. She was in company with her little girl.”

Well, we wish Mercy Johnson a safe delivery as she prepares to deliver her fourth baby in Donald Trump’s country during this Coronavirus pandemic