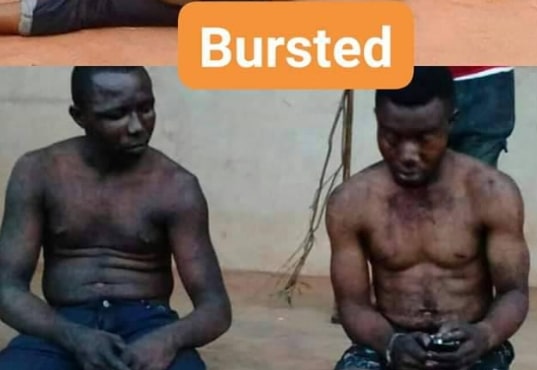 A policeman, Chibuike Ukazu, has been beaten to stupor and stripped naked by youths of Umueze community in Orlu Local Government Area of Imo state for allegedly indulging in homosexual acts.

A community source told our correspondent on Wednesday that the officer’s sex partner was also stripped naked.

It was learned that they were caught in the act on Tuesday evening, beaten and stripped naked and were taken to the palace of the traditional ruler of the community where they were jeered for practising sodomy.

The source said that packs of condoms were found with the homosexual partners.

“This particular police officer together with his colleagues chased a man driving with his car and threatened to shoot him if he moved any further. After discussions, they took bribe of N5000 from him and left. But This evening (Tuesday), he was caught having sex with his fellow man.

“They were caught red-handed by security men of Umueze Autonomous community, Orlu, after tracing them to where they had the sex”.

Another source, who is a member of the village vigilante, said;

“Items recovered from them are three sachets of condoms of different brands and the police officer’s identity card.”

Confirming the incident, the police spokesperson in the state, Orlando Ikeokwu said ;

On April 21, upon information received through a phone call, the Divisional Police officer in charge of Nkwere Division promptly moved into Umueze autonomous community in Orlu LGA, and rescued one F/NO.512351 Chibuike Ukazu.

“Preliminary investigation revealed that the youths of the community claimed to have caught the constable with one of his friends, name yet unknown but nicknamed ‘YELLOW’, in acts of homosexuality. As a result, the youths pounced on them and beat them to stupor, then took them to the palace of the traditional ruler before their rescue by the DPO and his team.

“The command, therefore, wishes to warn members of the public to desist from taking laws into their hand by resorting to self-help especially on infractions by the members of the Police or other security agencies, all are advised to report all grievances to the nearest Police station for prompt and decisive action.

“However, investigation into the matter has commenced with a view to unravel what actually transpired and if found culpable will face the wrath of the law.”