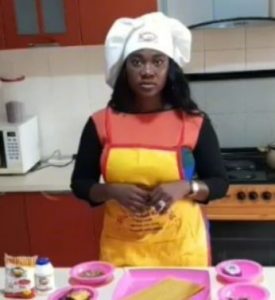 Nollywood actress Mercy Johnson wowed her fans yesterday when she spoke Yoruba language fluently as she goofed around with friends while warming up for her cooking show.

Judging by comments from her fans, Mercy Johnson thrilled them with the short Yoruba statement  she made in the 30 second-long clip

Watch the clip and see comments from fans below.

omotayo_omotade – So u Sabi our Yoruba language??? U must teach me urs o lolzz@mercyjohnsonokojie

_flor_rence – That Yoruba part though

simply_layo – Her Yoruba is smooth.

coolgbemi89 – Wow! So you can speak Yoruba like this

ogundipeyetunde – Funny you, I love the way you spoke Yoruba

She may not hear Yoruba language but as an actress, she is used to rehearsing her script and that is exactly what she just did in the clip above

Mama Purity is putting her acting skill to use for the benefit of the new brand she is marketing, Mr Chef Salt.

In a movie released back in 2014, Mercy Johnson played the role of a troublesome Yoruba recharge card seller.

Watch the trailer of the movie titled Native fowl below