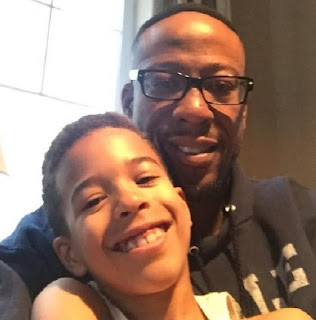 Family of friends of Iris Ross and her children are urging Facebook to delete a video, American Inspirational speak, Milan Ross posted on Facebook shortly before he killed his entire family on Christmas day in Phoenix Arizona.

Those who saw the video he posted on his official business Facebook page have urged the social media giant to remove the video out of respect for the deceased.

Watch the touching video below

Here are some comments posted on the above video

Sandra Alexander – Facebook needs to delete this video to show respect for the family of those whom lost their life. This is very disrespectful to her family.
Beau Sisson – It is so difficult to watch. Nigel was such an incredible kid to know and it destroys us to watch his last happy memory sitting next to this despicable monster – one that betrayed his trust and love

Antonia Wilcox Marquita Wilcox – this monster killed his family on Christmas Eve. I say he was still fat and miserable on the inside despite his major weight loss. You can look different on the outside but if you don’t change in the inner you to match it’s not going to work. so sad for the victims

Denise González – Seeing this video breaks my heart. You can clearly see how much this sweet boy loves his dad…you can see the love for his father in his eyes and his body language. How could he have known that he would be taking his life?

Mo Love Vannah Alexis – this guy posted this then went and killed this child, his 10 month old and his ex wife on christmas. The world is a scary sick place.

James Nelson Jr. – It’s possible he was suffering from a bi-polar disorder, maybe? I know he and his wife were separated and she was divorcing him. But why the kids? Is it the whole “Well, if I can’t have them, you can’t have them” mentality? Or was it an argument that was just so hate filled at the end, it just made him blind to feeling anything when it came to deciding to end their lives.
2 and a half hours between the video and his text to his Sister-in-law that he just killed his wife and kids when it didn’t happen for another 30-40 minutes. Bizarre.

Antonella Savino – How do you kill innocent people? Whatever you had, you could have killed yourself, poor children! I watch the video and m identify in the baby, kissá what suffering! And the little one, so small from nos that she didn’t even have time to live! Bad story! I pray for their souls! But not for him!

Jeff Klock – He wanted to cops to kill him …didn’t happen ..child killers and pedophiles are the lowest scum in prison ……he will be a target ….best thing for him is get death…then he will have his own cell……I used to have severe depression….this was revenge.

The video is still live on his official FB page as at the time of this report.

Milan Ross, Motivational Speaker Who Killed Ex-Wife & Kids On Christmas Day Has A Dark Secret
6672 Nigerians Deported From Libya In 2017 Urged To Release Identities Of Their Traffickers