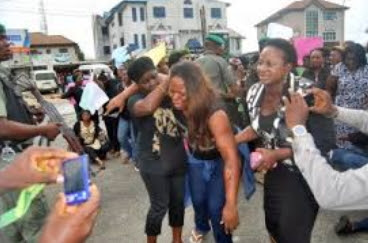 Some suspected militants working for a notorious kidnapper Igwedibia Johnson aka Don Wayne have wiped out an entire family in an attack carried out after crossover service in Omoku area of Rivers state.

According to eyewitnesses, a man and his wife and their five children were returning from a crossover service in the company of 8 other worshippers when they were shot dead in Omoku area of Rivers stae.

The 52 injured victims of the attack are currently clinging to life in different hospitals in Rivers state.

The bodies of the 15 victims have been dumped at government secretariat in Omoku as relatives besieged the place to recover bodies of their loved ones for burial.

The leader of the militants responsible for the mass murder is currently on the run after the military invaded his camp in the wee hours of Monday the 20th of November 2017.