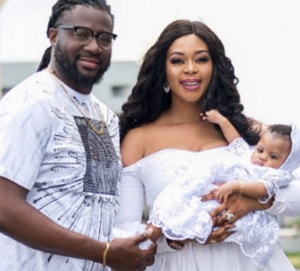 Nollywood actress Mimi Orjiekwe has dragged her ex-husband furiously for taking part in a recent promotional campaign for a condom brand.

The actor who is fathering 3 children with 3 women was called irresponsible by Mimi for refusing to be there for their daughter.

Here is how Mimi dragged her former husband on the social media:

“So I was jus reading a script that got me thinking … what makes some men sooo ?irresponsible … I ve thought soo much and I don’t just understand .is it Upbringing or family orientation or showbiz or infact it’s crazy ..

how can u ve babies with 3 diff women .. u don’t and cannot pay bills for any of your child cos ur broke round the clock and u still go on to impregnate another .. is it a cause from the devil himself .. so now u ve diff children growin in d hands of diff women u don’t even make an attempt to assist or co parent ..

this women re struggling to keep up and fight for there child’s best .. and u ve d gut to do a condom advert ..hell will even reject you ? ..goodpart is the table turns around and Favour’s d women like me .. ????

the joy of becoming a parent is unmeasurable I wonder why some parents choose to be a Judas .. God help u..Ladies beware of such halfdozen typo men #findadozenfull# ?”

Social media drama is fast becoming a trend in Nigeria.