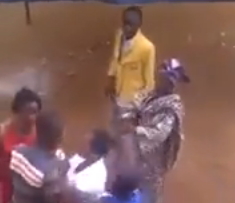 Check out the viral video of a man who was given a deadly punch while attempting to rescue a lady fighting with a young guy.

Onlookers had earlier attempted to stop the fight but the young man refused to stop before the middle aged man decided to intervene.

A single punch the attacker gave him threw him off balance before he collapsed.

Say no to violence!

Continue Reading
You may also like...
Related Topics:attack, deadly blow