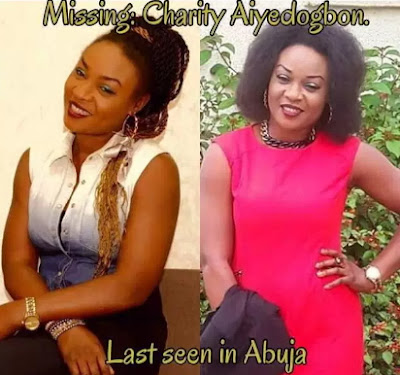 Barring any last minute change in arrangement, the office of Nigeria’s Inspector General of Police (IGP) will be conducting an autopsy/DNA test on a corpse said to have been dismembered beyond identification, allegedly seen in Abuja on the 12th of May, 2016 and identified by Lagos lawyer, Emeka Ugwuonye as that of the missing Abuja woman, Charity Aiyedogbon.

This is part of the steps in unravelling the mystery behind the sudden disappearance of ‘’Chacha’’, as she is fondly called.

When conducted, it will put to rest the controversy over the actual identity of the lifeless body, guide the Police in its investigations, confirm Ugwuonye’s claims or deflate his ego and ultimately guide the public, earlier fed with unsubstantiated reports of alleged murder of the missing woman by her ex-husband, David Aiyedogbon.

The dismembered body came into the picture, when Ugwuonye displayed same on Facebook, alleging that it was that of Chacha, directly accusing her ex-husband, David Aiyedogbon of having a hand in her alleged death. Hear Ugwuonye:

In another post on his Facebook group, Due Process Advocate (DPA), Ugwuonye said: This is the headless and dismembered body of Charity Aiyedogbon (posting a corpse on his Facebook handle). DPA has been able to identify this as her body within the limits of resources at our disposal. This body was discovered by school children on May 12, 2016, by accident in a remote area of Abuja, but which is close to Gwarimpa. The body was dumped at the spot, presumably over the night. DPA contact and resources had pursued the trace as to how the body was disposed. We are fairly comfortable with the information we have.”

Anyone that read the above posts will assume that there were some substance in the claim; considering the certainty with which it was made. Unfortunately, there is nothing suggesting credibility in same.

First, the missing woman has four grown-up (educated) children and none of them has identified the corpse as that of their mother. Her ex-husband of twenty-six years, David Aiyedogbon also never identified same as that of his ex-wife. Chacha’s parents are alive and her four siblings are going about their normal businesses. None of them has identified the corpse as hers. In fact, as at the time of filing this report, no member of her nuclear or extended family, not even the Police, have seen the corpse paraded on social media by Mr. Ugwuonye, not to talk of identifying same as that of the missing woman.

Following his (Ugwuonye’s) claims at the Police Station that one of the suspects, Jo, whom he earlier claimed was his client, identified the corpse as that of Chacha, the Police re-invited him (Jo- who was on bail). Upon arrival at the station, Jo denied him. First, he came with his lawyer, saying he neither briefed nor consulted Emeka Ugwuonye as his lawyer. Second, he denied ever seeing or identifying the corpse to anyone, including Ugwuonye, insisting that he only saw the said corpse on Facebook, just like many others.

Now, how did the dismembered body come about? How did Ugwuonye come into this and what was his interest? He claims not to have met with the missing Chacha ever before, yet he is able to identify her dismembered body in death? On countless times, he declared the woman dead, even when her children said she is not. Till date, he has not provided any single evidence to the Police to substantiate his claims? Now without evidence, how do you declare a missing person dead? Without a DNA test and/or physical recognition by relatives, how do you identify a corpse? Is this what Harvard University, United States of America (that trained Ugwuonye) teaches in its law faculty?

The puzzle of the actual identity of the corpse Ugwuonye will show the Police this week will be solved in the coming days, and I wonder where he will stand if it is confirmed not to be Chacha’s body.

Meanwhile, the first puzzle was solved earlier, following the admission by one of Chacha’s lawyers, Barrister Nsikak Udo that Chacha’s signature was forged. He admitted that he lied on oath and his fate shall be determined by the laws of the land.

Barrister Nsikak Udo, handling a fresh suit filed by Chacha at the Federal High Court, Lokoja on 29th April, 2016 against 29 respondents, including her biological children and her former husband claimed she (Chacha) came to his house on the 18th of May, 2016 (eight days after her purported disappearance) and one of his staff accompanied her to Federal High Court, Abuja to sign and depose to an affidavit in support of the ex-parte motion filed along with the case. A case of perjury and forgery appears to have been established.

Now, Chacha’s last post before she ‘went missing’ shows that she sat on the passenger’s seat of her car. That was the last she posted on Facebook, using that particular User ID- Deepdealdehammer. The question is: who drove her in the car and where were they going?

Today, that car has been recovered, following a tip-off by one of the suspects in Police custody, IK Ezeugo. IK never opened up until Police arrested one of Jekwu’s friends, who now gave the lead, indicating that he (IK) personally drove the vehicle to the place where it was parked. His (IK’s) younger brother, identified as Paul Chukwujekwu Ezeugo (still at large) is believed to have been in custody of the vehicle. He (Chukwujekwu) is also believed to have driven the missing woman on that last trip. The car was found somewhere in Enugu State by men of the Nigerian Police, in the residence of one Uche, with its Plate Number and particulars already changed.

Again, Chacha’s two handsets have been recovered. One of them, a Nokia handset, is said to have been found with Chukwujekwu’s biological mother, Mrs. Ezeugo, believed to also be a guest of the Nigerian Police presently. The second handset (a Samsung Handset) was recovered from one Augustine, who claimed that one Odinaka, Chukwujekwu’s friend and phone repairer sold it to him for Twenty Five Thousand Naira. The proceeds, according to Odinaka, were handed over to Chukwujekwu. Just like the vehicle, the both handsets were found in Enugu. Now, where is Chukwujekwu? Is he in the country or has he fled Nigeria, as is being speculated?

Emeka Ugwuonye is from Enugu and Chacha’s car and handsets were found in Enugu. Chacha’s maternal home is Enugu. In fact, Paul Chukwujekwu Ezeugo and the missing Chacha’s mother are both from Oba-Nsukka, in Enugu State. Could her disappearance be an Enugu agenda?

More worrisome is the fact that the Police have kept Nigerians in the dark regarding their findings so far. While I agree that it may be premature to disclose certain sensitive findings on the matter, it is a tactical error to remain mum, while charlatans continue to mislead and divert the attention of Nigerians from the real issues. The least I expect is that after the DNA test, the Police should address Nigerians on the status of their investigation on Chacha’s case, while waiting for the Courts to resume before they can charge those that have questions to answer. But, why has Paul Chukwujekwu Ezeugo not been declared wanted by the Police, if they feel strongly that he has questions to answer and is on the run?

At the risk of sounding judgemental, Emeka Ugwuonye has questions to answer on missing Chacha’s case and no one can convince me to the contrary. He claimed to have been in the United States as at the time of Chacha’s disappearance and only came into Nigeria in June, 2016, after being briefed to handle the matter, but his call log betrayed him, showing that he was in Abuja on the 10th, 11th and 12th of May, 2016; same time Chacha is said to have got missing. Was he there to supervise her disappearance?

Also, he has a very suspicious relationship with one of the prime suspects, Chukwujekwu Ezeugo, popularly called Jekwu (still at large) and his call log shows a lot about it. He is also suspected to have aided his escape, as, according to Police sources, the day he (Jekwu) was to be picked up by the Police, Ugwuonye personally called the Police, promising to produce him, only to revert 24hours later, telling the Police that he had escaped. There are lots and lots of questions for Ugwuonye to answer.

Meanwhile, understanding how bad the matter is getting, Ugwuonye recently played a card, announcing his withdrawal from Chacha’s case, a move Police sources described as diversionary, since he is already a suspect in the case.

A school of thought holds that his earlier accusation of the ex-husband of the missing woman, David Aiyedogbon was aimed at diverting the attention of the Police from focussing on the actual persons, believed to be close to him.

Reports say Ugwuonye has appealed to lawyers to David Aiyedogbon not to sue him for defamation of character, promising to apologise publicly. But, was he not given time to apologise earlier and he refused, or is my memory failing me? Mr. Aiyedogbon, a retired Civil Servant earlier wrote his accuser-Ugwuonye, through his lawyers, demanding an apology, failure which he would seek legal redress. He refused to utilize the window. Why now?

The letter titled: “Defamation of the character of David Aiyedogbon; demand for apology,” signed by his lawyer, Barrister Tony Ogbulafor and made available to newsmen, expressly states: “It is our instruction to demand an unqualified apology from you to our client through our chambers for the defamatory publications you have made of and concerning our client.”

But, are the latest appeals to Mr. Aiyedogbon’s lawyers not to sue him and the Police not to make him an accused in the matter helpful? What about the Police officer, whom he wrongly accused of receiving bribe from a lawyer (in an envelope) to detain him and the lawyer himself, who have vowed to institute legal actions against him? Anyway, let him continue to beg; he might be lucky and they forgive him. But how does he tell his members in DPA, whom he has consistently fed with falsehood?

Chacha’s case is getting more interesting. While we await the outcome of the DNA test, there is no doubt that those in possession of Chacha’s car and handsets have something to tell the world about her whereabouts; or is her disappearance a set-up or another Nollywood movie?

Only time shall tell!