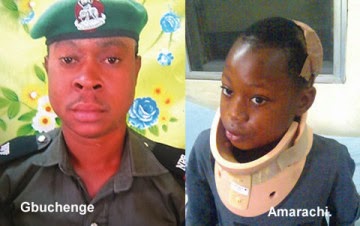 April 27, 2014 – Mobile Police Officer Attempts To Use Girl For Ritual

A Lagos-based police officer identified as Gbuchenge Augustine is currently on the run over an alleged ritual case.

The Mobile policeman with Force ID# 400823 in Lagos allegedly tried to use an 8-year-old girl for ritual before he was exposed.

The girl identified as Amarachi, was found under his bed in his one-room apartment at Olufowobi Street, Ikosi Ketu with her mouth gagged and legs and hands tied. When she was eventually rescued by neighbours, little Amarachi had injuries on her skull and neck.

Trouble started for the policeman in the evening of Thursday last week when the parents of the girl, Mr. and Mrs. Patrick Abakwan, who had gone out for their businesses returned and did not find their daughter, Amarachi at home.

The girl’s father, a driver with Strands Communications Limited, told journalists that when he returned from work, he noticed that Amarachi did not come to greet him and when he queried his wife on her whereabouts, he was told that she was asleep.

“I demanded to see her and when they went to call her, she was nowhere to be found. Another little child in the compound later said she saw “Oga Olopa” (the policeman) carrying Amarachi in his arms from their room where she was sleeping, to his room. You know, as a child, nobody took her seriously but the child insisted that Amarachi was in the policeman’s room.

“The policeman, we gathered, had before the incident, sent Amarachi to buy Akara (bean cake) and recharge card at different times before she went to sleep.Mr Abakwan said the policeman, who sat outside his room smoking, got up and pretending to be angry, insisted that he was falsely accused.

It was gathered that the suspect used the opportunity of the ensuing confusion, to escape from the crowd that had gathered in their residence, and had not returned as at press time. The parents of the girl later reported the incident at the Ketu Police Station and investigation has commenced.

According to the girl’s father, the Police detective sent to their home, peeped through the window of the suspect’s room and found two human legs struggling to be freed. It was gathered that the crowd at the scene later broke into the policeman’s room and set the girl free.

“The man had twisted her neck and used an object to break her skull thinking that she would die in the process but God saved her. My interest was to save my daughter first. We rushed her to Dafe Medical Hospital where they refused to admit her,” the father narrated. The state Police Spokesperson,Ngozi Braide said the Police have started investigation to ascertain if the suspect is truly a policeman.