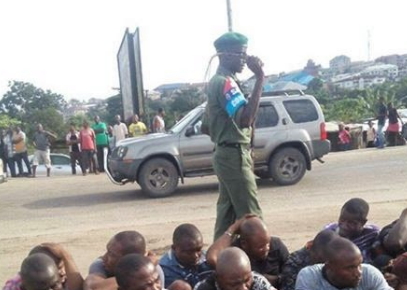 Troops of 144 Battalion stationed at Ngwa High School, Aba, Abia State have arrested a 30-year-old man identified as Michael Alozie for allegedly conniving with one Nneoma (not real name), an SS.1 student, to fake her kidnap and demand a ransom from her parents.

Alozie, who claimed the student was his girlfriend, was arrested in a hideout at Chokoneze, Mbaise, in Imo State by a team of soldiers, who stormed the village after investigations revealed that he held the victim hostage in the area.

It was learnt that Alozie had earlier threatened the girl’s parents through repeated calls and text messages, demanding a ransom of N1.5m.

It gathered that during interrogation, Alozie claimed he planned to marry the student and blamed his friend, now at large, for sending threat messages to her parents, demanding ransom.

The suspect also allegedly impregnated the student and threatened to kill her if her parents failed to pay.

However, the parents who didn’t know that their daughter agreed to her own kidnap and got pregnant for the suspect, agreed to pay N1m as ransom.

While agreeing to pay the ransom, the parents alerted soldiers who traced the suspect to their hideout at Chokoneze, Mbaise, where the girl was also arrested.

A medical report made available to Southern City News revealed that the student was confirmed to be five months pregnant for her lover.