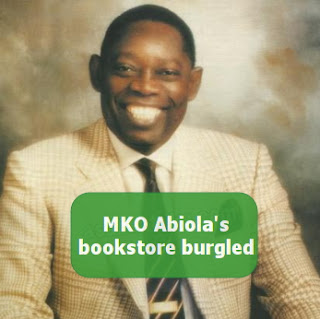 The properties allegedly stolen by the accused persons, according to the Police included a generator, welding machine, books, tank and printing machine.

Police said that the accused persons allegedly threatened the life of Mr Ajayi Oluwatosin, a security officer attached with Pexion Security services and other staff guarding the bookshop to gain entry into the shop to steal and damaged properties valued at N500 million and escaped.

A police source said that the arrest of the accused persons was ordered by the Assistant Inspector General of Police, AIG in charge of Zone two Command, Onikan, Lagos following a petition by the children of Late Moshood Abiola represented by Mr Deji Abiola.

After investigation by Inspector Sunday Oyelani and his team, the accused persons were charged before an Igbosere Magistrate Court, Lagos on a seven-count charge bordering on conspiracy, threatening violence, forcible entry, malicious damage and stealing.

Emby told the court that the accused persons connived and invaded the Late Moshood Abiola’s bulk purchase bookshop in Oshodi, to steal books and other properties valued at N1b and damaged properties worth N500,000,000 after they allegedly overpowered the security men on duty and escaped.

He said the accused persons were arrested at their hideout following a tip off.

The accused, however, pleaded not guilty to the alleged crime and Chief Magistrate Folashade Botoku granted them bail in the sum of N10,000,000 each with two sureties each in like sum who must show proof of three years tax payment to the Lagos State government.

Botoku adjourned the case till 1 February, 2018 for mention and ordered that the defendants be kept at the Ikoyi Prison, Lagos till they are able to perfect their bail conditions.