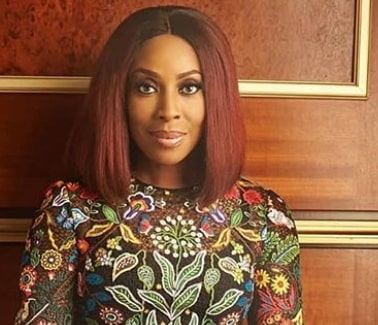 Media mogul, Mo Abudu, has made Nigeria proud as the first African to win the Medaille D’honneur award at the at Marché International des Programmes de Télévision (MIPTV).

MIPTV, which takes place annually in Cannes, France is one of the most important trade shows for TV and media. This year’s edition runs from Monday, April 8 to Thursday, April 11, 2019.

Mo, as she is fondly called, shared images of her receiving the award via Instagram.

Captioning one of the picture in which she was with three other people, Mo, who has produced movies such as Fifty, Wedding Party 1&2, and others, wrote: “Most important of all, I had to Give God all the glory. Only HE makes all these incredible things possible in my life. Sharing the stage with 3 other incredible people honoured with this award tonight – US writer, showrunner and producer, Ilene Chaiken, chairperson of the Banijay Group in France, Stéphane Courbit, and UK managing director of Sky Vision, Jane Millichip.

“Camille Bidermann, Executive Director of the International Academy of Television Arts and Sciences, presented me with my award last night. Thank you so much Camille for your words of inspiration. Much love.

“A major part of my acceptance speech was dedicated to the creative business leaders in the room and the need for a partnership between our respective continents, so that our stories can be told with authenticity and produced to the best international standards. If these stories are told from both our perspectives there is a captive audience on both sides of the Atlantic waiting to be entertained as never before and with creative business leaders adding significantly to their bottom line.”

The MIPTV Médailles d’Honneur are awarded to those who have made a significant contribution to the world of television and the development of the international TV community through their talent and leadership.

Mo, one of Africa’s top producers and multiple award winner, launched EbonyLife TV in 2013 and has since then produced over 1,000 hours of original programming each year.

Continue Reading
You may also like...
Related Topics:award, mo abudu