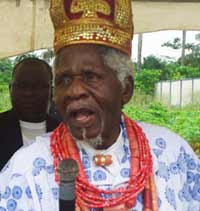 A monarch in Ogba/Egbema/Ndoni Local Government Area and two other leaders of the area have been arrested for allegedly sponsoring cultism.

The Rivers community has been enmeshed in cultism in the past years.

Many people have been killed in cult-related activities.

The monarch and his suspected accomplice were arrested in their homes on August 1 and 3 and have been in police detention.

Parading them with over 30 others suspects arrested for various offences, Police Commissioner Chris Ezike said the community leaders organised and taxed members of the community N1 million, which was donated to a “notorious” cult leader, Don-Wali, of the Icelander group.

Ezike said the arrest of the community leaders had “opened a new chapter in the connivance, involvement and sponsorship of community keepers in cultism”.

The police chief said the onslaught against criminals and their sponsors was part of the command’s “Project Rescue Rivers State” aimed at “restoring sanity and security to the state”.

He said the suspect would be charged to court soon.

Continue Reading
You may also like...
Related Topics:arrested, cultism, Monarch