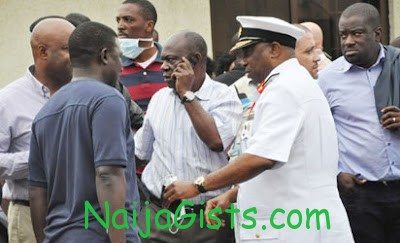 Two traditional rulers in Itori Ewekoro area of Ogun State Nigeria on the 2nd of Oct, 2012 exchanged blows at a police station in the area. naijagists.com

According to witnesses, the monarchs identified as The Olu of Itori, Oba Akorede Akamo and the Baale of Lapeleke, Chief Adisa Akinremi went to the police headquarters on invitation in order to resolve an ongoing dispute when the fight broke out.

We learnt Baale Akinremi had earlier complained against Oba Akamo at the police station for disrupting a cultural festival organized by Lapeleke people on Monday night.

After the complain, Obama Akamo was invited to tell his own side of the story.

The Owu people, who are the indigenes of Lapeleke Village, a neighbouring village of Itori, were said to be celebrating the annual Owu cultural and heritage renaissance festival when Oba Akamo allegedly led a group of people to disrupt the ceremony.

They were said to have shot sporadically into the air, resulting in a stampede during which several people were injured and property destroyed.

Confirming the incident, the state Police Public Relations Officer, Muyiwa Adejobi, said the matter had been transferred to the command headquarters for further investigation.

Mr Adejobi, an Assistant Superintendent of Police, added that the Criminal Investigation Department had taken over investigation into the incident.