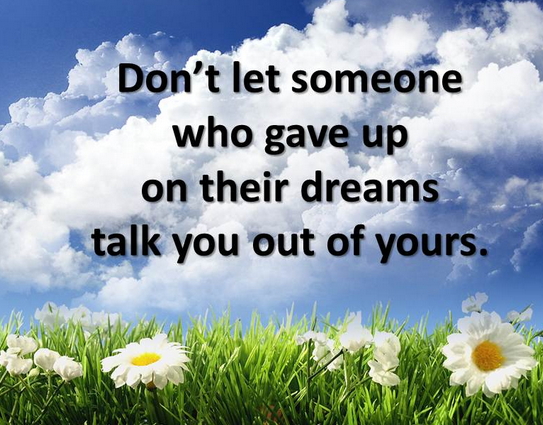 If you are a Star like David and Moses or you have a special destiny, like David or Joseph, you need to beware of DREAM KILLERS. One thing is certain, your divine dreams will surely come to pass (Habbakuk 2:2). Though God has shown you his plans through your dreams, the way He is going to accomplish them, He will never share with you or anyone around you. He says

Imagine Pharaoh looking after and taking care of the one that will eventually deliver a people from his hands. Imagine the ways of God. God used him against his wishes. Who is there born of dust made into flesh that God cannot use and even dump because they are of no further use to Him and because their names are not written in the book of life. He is God and He will never share His glory with anybody.

Not to dream is to remain lowly or poor. However, the bigger the dream, the greater the attack. The greater the dream, the greater the visits from Satan and his cohorts. Physical attacks, assassination attempts, abuse, insults, blackmail, threats, spiritual attacks etc will come. When these fails, direct confrontation will replace them. It is then you begin to know who is your enemy just like Joseph discovered very late who his enemies were. He almost lost his life in their hands. Those very close to you who knows when you were small, when they use paper to clean your nose, wipe your bum, wash your clothes and take you to school are the ones you need to watch out for most. It is they who often call the outside thieves to come.Then you also need to beware of those who become your acquaintances along your path of life some of who will in the long run become jealous of you because of your visions and dreams. No matter how good your vision and dreams are, they will never support you. Some will come around to use you. Others will be there to learn from you and try to steal your visions. While others will come around you just to see and then to go condemn you at your back for no good reason. Yoruba people say “bi a kole fun kofe kogba, kofe kogba ko ni fe teni” meaning if you buy a car or build a house for your antagonist, the antagonist will never like you.

“Nobody has ever done that before” “That cannot be done” “Who is he/she?” “When was he born?” “What does he/she know?” “He/she is a bad person” are the questions, insinuations, inuendos and ugly talks they will be raising at your back.

The good and dedicated ones around you will selflessly focus on the visions and its benefits for mankind while the petty minded ones will focus on you. They would have forgotten that this was exactly how the people of the old thought nothing good can come out of Nazareth. The good ones will support the vision as if its their own. They will become destiny builders. They will see possiblities while dream killers will be seeing impossibilities. When Joshua sent the spies to see Jericho, the dream killers came back with reports of impossibilities.

Dream Killers comes in various types and shapes. Pharaoh was a dream killer. He killed all Jewish babies because he knew one of them will deliver the Israelites. Herod was a dream killer who tried to kill Jesus because he was aware of the prophecy concerning the Lord’s birth. Many children lost their lives because of this.

Many aspirants kill their fellow aspirants. Till today we do not know who killed Bola Ige but God knows and I know the person who organised it will not go unpunished. We do not know who killed Williams in Lagos but I know God knows and whoever did it will rot in hell. WE do not know who killed that promising young guy in Abeokuta but God knows and will one day punish them and their families. Those who kill by the sword shall perish by the sword. When David killed Uriah and took his wife, God told him that bloodshed will never depart from his family. It never did as his children began to kill one another. Many destiny carriers have been killed by the impotent and evil people. The odd bit is that when God is punishing them with various calamities, people will be sympathising with them without knowing that their hands are full of blood.

Please beware of who you share your dreams with. Joseph made that mistake with his brothers. Mistake it was, but it was a way God used to make his dreams come true. They eventually bowed down before him. They will bow down before you in Jesus name, amen.

The Benefits Of Kingdom Stewardship By Bishop David Oyedepo
Unity Message For Nigerians: Igbo, Hausa & Yoruba, Let There Be Peace By Dom Anyanwu