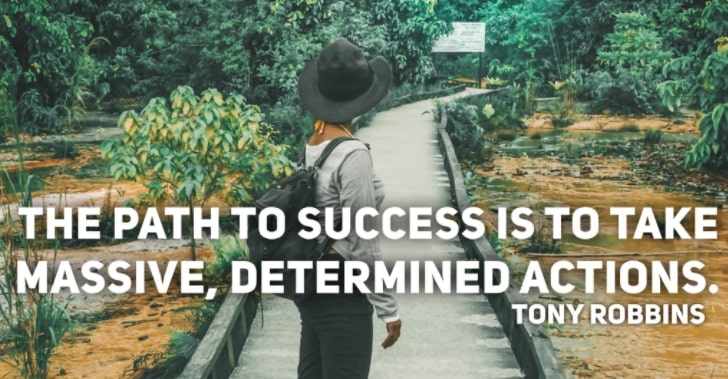 IF YOU WANT TO BE SUCCESSFUL, YOU MUST LEARN TO MAKE MORE MOVES AND LESS ANNOUNCEMENTS

“The path to success is to take massive, determined actions”-Tony Robbins

Confucius said, “The superior man is modest in his speech but exceeds in his actions.” Success is a product of taking massive actions in the right direction. If you want to be successful, you must learn to make more moves and less announcements. Keep your announcement secret until you know it’s permanent; never announce your moves before you make them. The gap between decision and destination is action! Action and not just ‘talking’ is the real game changer. The rich take more actions than they talk; the poor talk more than they take actions.

I have observed that some people are so knowledgeable, but not successful. Do you really know what the missing link is? The missing link is ‘ACTION.’ The key to success is massive action. I have realised in life that taking action is better than waiting for perfection. Theodore Roosevelt said: “In any moment of decision, the best thing you can do is the right thing, the next best thing is the wrong thing and the worst thing you can do is nothing.” By acting, you would learn three critical things- ‘What works,’ ‘what doesn’t work’ and ‘what can be made better.’ Wayne Gretzki said: “You miss 100 per cent of the shots you don’t take.”

Many people are poor because they are ever talking but never taking actions. When you talk more than you take actions, your dreams will never come to reality. When the rate at which you talk about something is far more than you are taking necessary actions towards it, you will not get result! Cultivate the winners’ habit of taking actions and leave the talking to others. Dale Carnegie said: “Inaction breeds doubt and fear. Action breeds confidence and courage. If you want to conquer fear, do not sit home and think about it. Go out and get busy.”

There are many reasons why the United States of America beat Russia in the race to landing a man on the moon, but the major reason was that while the Russians were busy talking about it, the Americans were seriously taking massive action towards their goals. The two countries were both far ahead in technological advancement, but America won because they put in more actions than the seemingly more advanced Russia. The Russians learnt a big lesson that: when the rate at which you talk about it is more than the actions you take towards it, it seldom gets done. This is a story of two great nations with big intentions, both armed with great technological advancement, one has big mouth but the other took giant steps and reached the destination. We reach our destination not by the size of our talk but by the persistence of our actions.  It is not by the size of your mouth but by willingness in your legs.

Lao-Tzu once said, “A journey of a thousand miles begins with a single step.” On May 25, 1961, President John F. Kennedy stood before the United States congress and said he foresees a man on the moon by the end of the decade. Most people thought it was impossible. Even some of the people running NASA thought it couldn’t be done. Some congress members even laughed him to scorn. People believed that the technology required to make it happen didn’t exist, and they weren’t sure that it could exist. But that didn’t stop Kennedy from taking committed steps towards his dream of landing a man on the moon.

Back in the late 1950s and early 1960s, America was in a space race with the Soviet Union, and the Americans were actually lagging behind. USSR was the first to launch a satellite, Sputnik, into the orbit, and then they launched Sputnik II, which carried the first space traveler, Laika, the dog. And in 1959, they sent off Luna I, the first space craft to escape the earth’s gravitational field and fly by the moon. The Soviets also sent the first man into space, and one of their ships made the first orbit of the earth.

The U.S public’s perception of the Soviet lead in putting the first man in space, motivated president John F. Kennedy to ask the congress to commit the federal government to a program to land a man on the moon by the end of 1960s, which effectively launched the Apollo program. Apollo was one of the most expensive American scientific programs ever. It cost more than $20 billion in 1960’s dollars or an estimated $205 billion in present day US dollars!

Despite all the doubts, on July 16,1969, Apollo II lifted off from pad 39 at Kennedy space centre and began a journey of 244, 930 miles to the moon. Four days later on July 20, 1969, Neil Armstrong and Buzz Aldrin Jr landed on the surface of the moon and 500million people watched on television as Armstrong took his first step on the moon and utter his famous line: “That’s one small step for a man, one giant leap for mankind”. The bitter truth of life still hold that: ‘’Hope is not a strategy’’. We must hope for the better but we must also take massive actions towards our belief.

America was able to beat Russia through their continuous and consistent action plan. Through massive actions towards their goal, they eventually achieved the unimaginable! For every achievement that beats human imagination, for every giant stride, there are giant steps to take. JFK showed the world that there is no impossible goal but unwilling steps; every goal is achievable if only we could take the right steps. Our actions today secure our future tomorrow. Tony Robbins said, “The only impossible journey is the one you never begin.”

Dreams don’t fulfill themselves. The habit of putting ideas into action is the key to success. Take more of actions and do less of talking. You can’t build a reputation on what you are about to do, take actions! C.G. Jung said, “You are what you do, not what you say you’ll do.” Enough of talking and start taking actions. Take daily actions that will lead you to accomplishing your goals. Faith without any accompanying action is suspicious! TALK is Nothing; ACTION is Everything. Robin Sharma said, “The tiniest of actions is always better than the boldest of intentions”.

Chauncey Depew said, “The first step towards getting somewhere is to decide that you are not going to stay where you are”. Visions without execution are just hallucinations. Visualize your success, then take actions! Dreams become regrets when left in the mind, never planted in the soil of action. The most difficult thing is the decision to act; the rest is merely tenacity. Stop thinking, start doing. Action is the antidote to despair! No matter how despairing or Herculean a task seems, take the necessary actions. The only impossible journey is the one you never begin. Martin Luther King, Jr. said, “Take the first step in faith. You don’t have to see the whole staircase, just take the first step”. Not in speech, not in thoughts, I see greatness, only in actions!

After you’ve designed your dreams and goals, the next thing is to make a “Massive Action Plan” (MAP) towards the achievement of the goals. MAP is a 3-step process designed by Tony Robbins to achieve tangible results and live an extraordinary life. Once you have absolute clarity about the exact result you want and why you must achieve it, the next step is to create the MAP (Massive Action Plan) to get yourself there. Using a MAP goes beyond goal setting; it changes the emotional meaning behind all of your activities and forms a stronger link back to the outcome, making it more likely you’ll achieve it.

When you’re creating your MAP, ask yourself, “How much?”, “By when?” and “For what purpose?” Then write it down. Make it a permanent, tangible expression of your mental target. The three main components of MAP are: “Write down the results you want to achieve”, “Write down your purpose (compelling reasons why you want to accomplish your goals)”, “Develop a sequence of priority actions”.

The only thing separating you from your grandest dream is your action steps. Write out your life dreams and vision; take daily massive action towards your dreams and vision. Think of a big goal that you want to achieve. Now write a list of all the small actions you need to take to get there. Focus on the small, achievable steps in the process, and soon, you will have successfully reached your goal.

QUOTE OF THE WEEK: “Take action! An inch of movement will bring you closer to your goals than a mile of intention”-Steve Maraboli

Obafemi Awolowo: The Class Warfare And The Man Who Saw Tomorrow!
Your Life Gets Better By Meeting People’s Need, Not By Acquiring More Degrees!