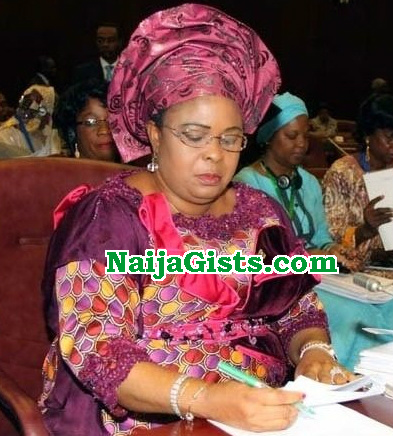 Ex-President Goodluck Ebele Jonathan’s wife, Patience yesterday sought the help of House of representatives over what she termed harassment by EFCC operatives.

In the petition laid down before the House yesterday, Mrs Jonathan claimed that the agency infringed her fundamental Human Rights.

A PDP member of the House from Delta State, Mr Idisi Lovette submitted the petition on behalf of Jonathan’s wife.

Idisi, while conveying the complaints of Mrs. Jonathan to the House, said under the Nigerian constitution, mere allegations did not amount to guilt until a proper conviction by a competent court of law.

He added, “This petition is in line with Section 36 where every citizen is presumed innocent until proven guilty. Mr. Speaker, the constant harassment of the former first lady is in a petition emanating from her that was sent to my office.

“With the leave of the House, I seek your permission to lay the petition before the House.”

The Speaker, Mr. Yakubu Dogara, referred the petition to the House Committee on Public Petitions for hearing.

It is expected that the former President’ wife will come to the National Assembly when invited, to defend the petition.

The key issue raised by the groups on behalf of Jonathan was that the EFCC had frozen her accounts and those of some of her close associates on account of corruption allegations.

They noted that some of the affected individuals were not under investigation by the anti-graft agency, but the agency still froze their accounts.

Part of the document read, “A simple cost benefit analysis of the EFCC’s current approach would reveal that it is harming this government’s strategic interest far more than the brief publicity it gets from its current modus operandi…

“We are urging you to caution and rein in the EFCC to operate within the confines of its enabling laws, lest it becomes victim of the corrupting influence of absolute power.

Tonto Dikeh Turns Born Again Christian: I Have Given My Life To Christ, I’m Not Ashamed….
Policeman Faints As Man Attacks Him With Charm In Lekki Lagos, Suspect Docked