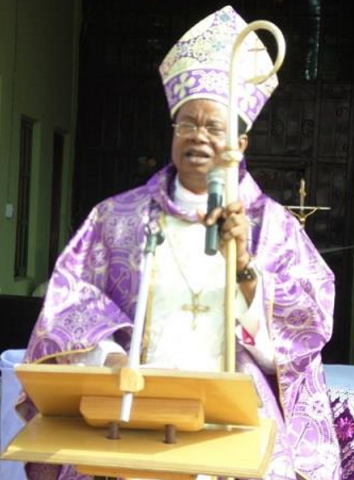 Applause has never ceased to trail the recent directive by Most, Rev Paulinus Ezeokafor, the Catholic Bishop of Awka diocese who placed a ban on the expensive burials made by clergies in the diocese. The bishop while speaking at the retreat of clergies at okpuno where he gave the directives, instructed that clergies should stop spending on food and souvenirs for clergies during funerals, as burials should be a time to condole with the bereaved and not a time to suck them dry, like most christian burials do.

In her swift reaction, Aisha Edwards, a Moral Crusader and Coordinator of Association of People Living with Sickle Cell Disorder [APLSCD] has applauded the Bishop for taking such bold step in a direction that affects all, yet neglected by all. Speaking to the Press in an interview, the vocal and eloquent crusader who in recent times have faced brazenly societal issues neglected by many, bared her mind on the need for such bans, stating that she wasn’t surprised that the Bishop is towing that path.

She Said: “There isn’t a better time for this ban than now, when people place more importance in celebrating the dead, than saving the dying. These days, people would not help you until you are dead, then they would sell lands and close accounts just to put a corpse in the ground”.

She further hinted that such boldness exhibited by Bishop Ezeokafor can only come from Clergies who are truly called by God,

“Bishop Ezeokafor is a man I accord much respect, his kind and humble spirit is one you rarely see these days among clergies. He is among the very few clergies I regard as being truly called by God. His charity is beyond imagination. So I am not surprised that among all clergy heavyweights we have in the christendom here in the South East, he is the one championing this move. This move in my opinion has earned him Divine reputation”

Aisha, in her opinion awaits the extension of the ban to the laity, who according to her should even be the first victims of the ban rather than clergies.

“in my opinion, this ban should have started with the Laity, other than the Clergy who live a celestial life and should be celebrated. The Laity go out of the way to turn Burials into festivals. The truth is, with the rate our economy is sinking, those who get burials now should thank God, because there shall come a time when burials would be costly that we can no longer afford them, we may now resort throwing of corpses”

However, the moral crusader after applauding the Bishop reminded him of other places of the mission that his hand of ban should be extended to.

According to her, the education system since its hand over from Government to mission, has experienced the nuclear form of corruption and grave injustice. The impacting of knowledge and morals which should be the primary purpose of these schools have been eroded and in its stead corruption, negligence and indiscipline are holding sway. All programs created to nurture children in school, have been replaced by carefully arranged programs to suck them dry.

Aisha advocated for the ban on extra and private lessons, as they do not play any vital role to the upbringing of the child, rather creates disparity and segregation, among the children.

Reiterating her stand for the ban of extra and private lessons in schools, especially missionary schools, she said they were unnecessary, as Teachers should focus on the judicious use of the normal school time the students pay for as tuition, and stop looking forward to the extra money they suck from parents in the guise of Extra lessons for their kids. Those extra lessons is not only corruption but also create inferiority complex among kids there parents are not buoyant enough to afford the exorbitant cost of the private lessons.

She Said: “Students are short changed through these lessons, the teacher knowing she has probably much income coming from the private lessons forgets her basic duty. She now focuses on the special kids who their parents can afford the extra lessons. These special kids get preferential treatments and most times the extra lesson students are 2 steps above the regular class in terms of course work”

In her agitation, Aisha lamented that the practice which started with lazy parents who have no time for their kids and would pay teachers to teach them is now becoming a norm in most schools, to the extent that teachers now lobby for some students to be in their class because their parents are supposedly rich. Class allocation is no longer by merit as it used to be, but now by how much the parents have.

“Teachers now pay less attention to the normal classes, and often times you cannot tell where these monies for extra lessons go to. In some cases the teachers complain that the school authorities eat this monies alone and leave nothing for them, thereby leaving the teachers with no option than to neglect their duties. So, this corruption is a chain that needs to be broken”

She insisted that the extra lessons should be scrapped, but if the schools feel need to still have them, then the lessons should be for subjects like French, Computer and entrepreneur, which are in the school common entrance curriculum but these subjects have no teachers handling them during the regular classes.

Aisha, advised that the director of education for missionary schools should provide auditors with the responsibility of making sure that text books paid for by the students are fully supplied by the publishers. This she said would check and control the deceit of the Publishers who fail to supply the complete number of books paid for, making it hard for the students to cope each time they are given assignments in those subjects.

Revealing more abnormalities in the schools, Aisha stated that the Bishop should also ban the incessant Launchings and Fund Raising that happen during graduation ceremonies, According to her these scare parents of some children who cannot afford the Launchings from gracing the graduation of their words, and in some cases some parents empty their accounts and even borrow just to launch one thing or the other. She advised that in place of the Launchings, the Bishop should bring back the SPEECH AND PRIZE GIVING DAY, which is the pride of every parent as they look forward to their kids being awarded scholarship and other prizes.

Aisha concluded by urging the Bishop to extend his searchlights to the missionary schools, and possibly place a ban on extra lessons. According to her the Missionary schools ought to set the exemplary path for others to follow, and there is a lot of abnormalities going on in the schools that need to be checked to avert a greater damage in the future, because the school plays a vital role in shaping the society.