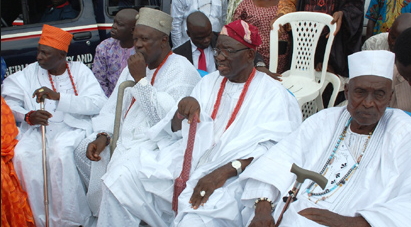 The Akannare of Ile Ido Ife was murdered yesterday during a meeting he presided over at Atagilere Plank Hall on Ondo Road in Ile Ife.

While the deceased asked those at the meeting to close their eyes for prayers around 10am, the suspected assassins smashed his head with dangerous weapons.

A young man who witnessed the murder said late Elutilo was a witness in a land dispute case currently before Justice Onibokun of Ife High Court.

Why Mercy Aigbe & Brother Were Arrested, How Police Seized Her Phone In Osogbo For Being Rude
Apple Employee Commits Suicide At Headquarter In California, Hispanic Male Shoots Self In The Head