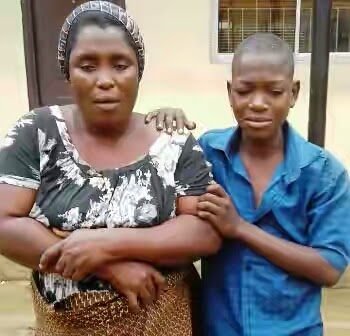 A 40-year-old woman has been arrested for allegedly using her son to extort money from the public.

Since 2011, the Abia-born suspect has been using her son, 11-year-old Sunny to collect alms in Oshodi area of Lagos.

Chinagoro Uwenke reportedly bandaged the boy’s leg with two rolls of white bandages and poured GV blue ink on his leg everyday to deceive people to give alms to the boy.

In her confessional statement, Uwenke said she came from Ata town in Abia state when she realized street begging is lucrative.

Uwenke said she left her other children in the custody of their father in Abia state while she hustles in Lagos to take care of them.

She pleaded with police to release her so she can re-unite with her family in peace.