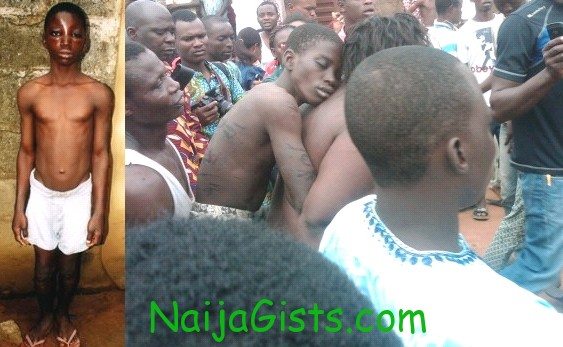 A wicked mother identified as Iya Anu has been arrested for allegedly beating her 16 year old foster son, Seubow to death in Lagos State, Nigeria.

This tragedy which took place at #8 Amosun st, Ijegun Lagos State Nigeria on Sunday August 5th, 2012 caused the death of the teenager.

According to sources, Seubow was a victim of constant abuse before his death.

We learnt the trouble started when the boy misplaced N1,000 note given to him for an errand on Sunday.

Because of this mishap, Iya Anu starved the boy throughout the day.

Before of the wake of hunger, hungry Seubow sneaked out of the house to buy N50 Gala.

When Iya Anu got to know, he accused the boy of stealing her N50. She then gave the boy the beating of his life.

An neighbour identified as Balikis said Iya Anu must have battered the boy with a hot object as his body was full of burns.

Balikis said, “Iya Anu began to beat him on Saturday night. The beating continued till about 9am on Sunday when her husband and the other children had left for church.

“She battered him till he gave up the ghost about noon. When she realised that the boy had lost consciousness, she cried for help but it was already late. At a point, she wanted to run away but she was promptly rounded up.”

According to another neighbour, Modinatu, Iya Anu, had in June battered the boy resulting in her being invited to the Isheri-Oshun Police Division for questioning. She said, “Seubow joined them in December 2011 and this woman has made life so unbearable for him just the way she does to her children too.

In June, the boy was battered to the extent that she was quizzed by the police. “Also, she has in the name of discipline used a knife to injure her first daughter, Anu, on her shoulders over issues bordering on misdemeanour.

“She is so violent that she even fights neighbours with objects at the slightest provocation. She was sent packing from her former place of residence on Jimoh Aigbe Street, which is just some few streets away from here when she injured her landlady with a knife.”

Corroborating Modinatu’s claims, Alexander Akinnurun, the Proprietor of Alex Group of Schools, Ijegun, the school Seubow attended before his death, described her as a troublemaker. He said, “She has been perpetrating those acts for quite some time now and reports of her heinous deeds abound.

In June, Seubow who happened to be one of my pupils came to school with a disfigured face and wounds on his body. “I was so moved by this that I reported the incident to the police. I don’t know how far the police went with the matter but I never expected that such an ugly incident would still repeat itself.”

When our correspondent visited the area on Monday, it was learnt that she had been arrested by the police. It was also learnt Iya Anu was a serial divorcee and is at present with her third husband.

When contacted on the phone, the Police Public Relations Officer in the state, Ngozi Braide, said she could not reach the Divisional Police Officer of Isheri Oshun.

“I can’t independently confirm the incident for now as the phone number of the DPO of the station is not available. I will get back to you as soon as I get through to him,” she said

Iya Anu was stripped naked by angry mob and forced to carry the corpse of Seubow to the police station.

This is pathetic! May his soul rest in peace.