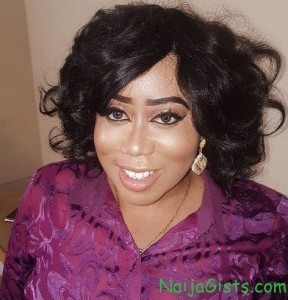 Here is what the actress told NET last night when they reached out to her.

‘Thank you for reaching me, I am not hurt, I just have a few bruises on the hand hand that faces the window that broke’.

‘I was on the third mainland bridge trying to turn from Ilupeju when one of the guys tried to use one of his hands to grab my neck while trying to grab my necklace. It was a funny robbery incident because they didn’t try to steal any other thing from me.

He tried to get my phone, but he didn’t get my phone, they other guy was on the other side trying to get my PA to wind down. Luckily they did not take my phone or money, they only broke my windscreen.’

When we asked if she tried to raise an alarm in other for onlookers to help her, she revealed that she didn’t receive help from anybody.

‘Nobody came down from their cars, it was when the robbers left that everybody started asking to know what happened to me.’