Police in South Delhi, India have detained 5 men over the brutalization of a Nigerian citizen  simply identified as Ahmed. 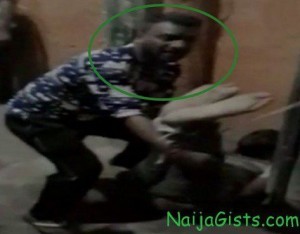 In the video, Ahmed was seen tied to a pole, while some men – many of whom have been identified by the police – beating him with sticks.

The men caught on CCTV footage were arrested after a doctor that treated Ahmed after the attack reported them to the police.

The locals who brutalised Ahmed confessed they launched the attack after he was caught with a wire cutter and a bag with master keys with him.

Moyo Lawal Almost Strangled By Robbers On 3rd Mainland Bridge, Says It’s A Funny Robbery
I Joined Robbery Gang To Raise Money To Pay My Wife’s Dowry, I Have Never Stolen Before – Robber