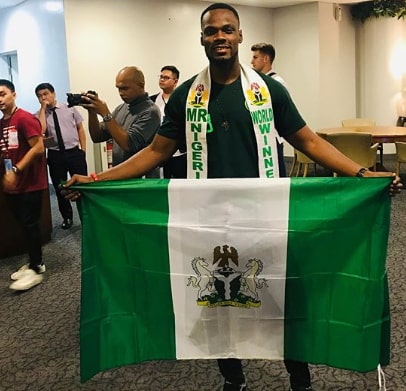 Nelson Enwerem, who left the shores of Nigeria on Monday for the 2019 Mr World Pageant in the Philippines has landed in the Southeast Asian country.

Enwerem spoke with the News Agency of Nigeria (NAN) shortly before his departure for the 10th edition of the contest taking place in Manila.

The competition to begin today Tuesday the 6th of August will wrap up on the 23rd of August.

80 countries will be participating in the contest.

Enwerem told NAN that he was optimistic of victory because he had worked hard.

“All the hard work I have put in will not be in vain, by the grace of God.

“I need Nigerians at home and abroad to vote for me by liking and commenting on all my posts on the official voting application,’’ he told NAN.

The contestant appealed to Nigerians to follow him on social media.

“Nigerians should log on to IG: @nelsonenwerem, while on Facebook: Nelson Enwerem and Mr World Nigeria, MobStar,’’ he said.

Although, I am not going with any entourage, I am confident of winning the world contest because I have all it takes.”

He said Nigerians’ support would help him to make history and bring honour to the country.

“I am calling for support and sponsorship by good-spirited Nigerians.

“I will be representing our beautiful country and I can’t do it alone.

“The official voting platform for the Mr World competition is a social media app called MobStar, people have to download the app, create an account, follow me and like my pictures as the contestant with the highest number of likes on his page wins the social media challenge,’’ he said.

He urged Nigerians to vote as many times as possible to boost his chances of winning.

“I need votes in order to increase my chances of winning. I have been preparing for this contest physically, mentally and spiritually,’’ he said.

He said that Nigeria had always done well at the world stage, noting that his predecessor, Emmanuel Ikubese, was the first runner up.

”I believe I can take my country to the next level with full support from Nigerians,’’ he told NAN.

The current Mr world, Rohit Khandelwal, who hails from India, will crown whoever succeeds on Aug. 23.