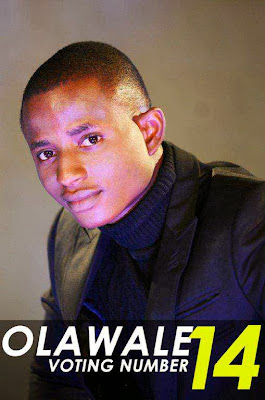 Olawale Ojo was the winner of MTN Project Fame West Africa Season 6. A final year student of Agronomy at Ladoke Akintola University, the gifted musician has teamed up with established and fast-rising producers to create a unique fusion of R&B, Fuji and Pop music for his debut album titled ‘Almost Famous’. He spoke to BOLATITO ADEBOLA about his music career

Tell us about your new album Almost Famous?

Almost Famous is my debut album, and I am very excited about it because it has a lot of great songs in it. It features various genre of music such as R&B, Fuji and Pop. Most importantly, there are great collaborations in the album too.

Why did you choose Almost Famous as a title?

When I was doing a photo shoot for my first single, the inner shirt I wore had Almost Famous inscribed on it and my manager saw it and suggested I use it as an album title; and instantly, it kind of fit in. Though, that was a long time ago.

How many tracks do you have on the album?

Who are the artistes you feature in the album?

The first artiste I featured was Lil Kesh on Follow My Lead. I also worked with Skales who is like a brother to me and Tiwa Savage who is like my sister. She was my mentor on Project Fame and after that we decided to work on a track Love Me and the song is like my favourite track on the album.

For your album, which producer(s) did you work with?

I worked with several producers like DJ Clem. He produced my first single, while Spellz produced two of the songs, DJ Coublon, Kenny Wonder, Filkizz and Masterkraft produced the song with Skales.

What are the challenges you faced before the release of this album?

Though, my first time of entering the studio was when I recorded my first single It’s Nothing, it was however quite challenging for me to get myself acquainted with the art of writing songs the Nigerian way. I am used to writing with a piano because I played the piano before Project Fame. I used to write songs as I play the piano and try to come up with lyrics and melody. But in the Nigerian way now, I have to create a beat, or the producer creates the beat to work with or right on the spot you create the beat and melody, which was quite challenging for me. But after the first track, and the second one, I adjusted to it all.

Aside the money, what other things would you say winning Project Fame has earned you?

The financial backing is quite small compared to the platform itself. I used to hear you have a big platform but I didn’t understand it until now. When I go out for events, the kind of reception I get is really good. A lot of people know me. Even the A-list artistes in Nigeria, when I walk up to them to introduce myself, they say things like don’t worry we already know you and that really makes me happy and grateful to MTN and Ultima Studios, for without them, I won’t be here. I don’t think I am here because I am talented; I just see it as a blessing because there are lots of talented people out there who don’t have the privilege of this kind of platform.

What is your source of inspiration?

I am not a stereotyped kind of person, so different things inspire me at different times. It depends on how I feel at that particular point in time. I have also noticed that I have a flair for writing love songs; it comes to me so easily and I think that’s my area of specialization. I also enjoy listening to R&B with music from artistes like Mariah Carey, Bruno Mars and Alicia Keys. Also pop songs from the likes of Beyonce, Jennifer Hudson and the like also inspire me. I don’t have favourite artistes, I listen to all, generally, but I find myself listening more to female artistes. I guess that’s because of my range. The Fuji side of me can be attributed to growing up in Ibadan. My first Fuji performance was on Project Fame stage and I was even surprised I could do it that well. I guess it’s been saved somewhere in my subconscious.

How have you been coping with stardom?

Though, one of the challenges I am facing now is the expectations of people. People expect a lot form me as the Project Fame winner. People have to grow and evolve but most people don’t understand that. They just want you to be like Wizkid or Davido overnight and things don’t just happen that way. One has to pay his/her dues first. I am paying my dues now and being very patient. I am not in a hurry to be the next biggest artiste in West Africa. I am not where I used to be and am definitely working hard and making progress and grateful to God.

What about female admirers and fans?

My female fans are very important to me. They make up 90 per cent of my fan base. So, I try to be very open and approachable to all but I don’t mix work with pleasure because for me music is serious business.

What is your philosophy about life?

My philosophy is that everything happens for a reason. God controls everything in life and like they say, we are just pencils in the hands of the creator. For me, I just found myself doing music, it’s not like I have a musical background.