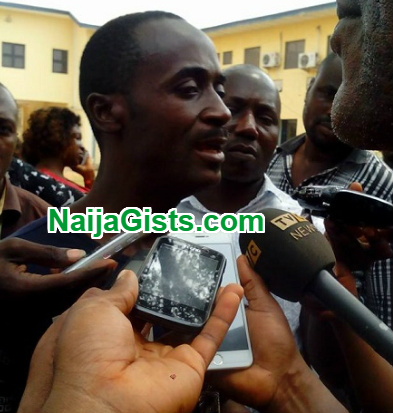 Oct 4, 2016 – Islamic Cleric, Alfa Beat Up Pastor, Destroys His Church For Converting His Followers To Christians In Iyana Ipaja Lagos

A popular Islamic cleric in Aboru area of Iyana Ipaja in Lagos has been arrested for assault and threat to life weeks after he allegedly attacked a Pastor in the area.

40-year-old Alfa Saheed Gbadamosi was today arraigned at a Magistrates’ Court in Ikeja for allegedly attacking one Pastor Emmanuel Ugbo who allegedly converted his clients to Christians.

The accused reportedly stormed Emmanuel Ugbo’s church on Sunday the 4th of September 2016 with hoodlums armed with dangerous weapons.

They chased away all his church members before unleashing terror on him.

The hoodlums also destroyed Ugbo’s church during the attack.

Alfa Gbadamosi pleaded innocence to the offence today and was granted bail in the sum of N100,000 with 2 sureties in like sum.

The case has been adjourned to October 10 for hearing.