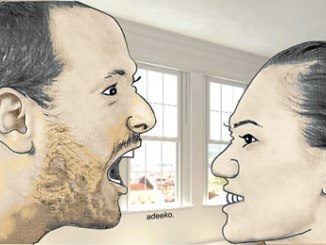 A wife today told an Idi-Ogungun Customary Court at Agodi in Ibadan that her husband, Taofeek, hated her because of her inability to read Qur’an and pray in Islamic way.

NAN reports that Olayemi Ajetunmobi’s husband, Taofeek, had approached the court for the dissolution of his 19-year-old marriage blessed with three children, citing wife’s insincerity and lack of cooperation.

Olayemi told the court that she agreed to convert to her husband’s religion 19 years ago before the marriage, but could not cope with Islamic doctrines.

“I cannot read Qur’an or observe the daily five prayer times and other Islamic rites, but I go to church without the knowledge of my husband.

“I lied to my husband that I did not attend any church,” she said.

She pleaded with the court not to grant the request of her husband, saying “I still recognise him as my husband”.

Taofeek also described his wife as a talkative and that his relationship with her was full of “deceit and insincerity”.

“I do not want any ugly occurrence because I have a hot temper; we have been living together like cat and rat since last year.

“The court should uphold my request so that peace could reign and both of us could live happily in our respective locations.”

The President of the court, Chief Mukaila Balogun, leading other members — Aare Samotu and Ganiyu Alao — granted the dissolution of the marriage and awarded custody of the first two children to the husband and the third child to the wife.

Balogun ordered the petitioner to pay N4,000 as monthly allowance to the respondent for the upkeep of the third child.

The court also ordered the petitioner to pay N12,000 and N5,000 as house rent and packing allowance respectively to the respondent.